Share All sharing options for: Can Ten Deep Really Work?

Next season, Villanova fields the deepest team in its proud history, with five McDonald’s All Americans (Reynolds, Stokes, King, Cheek and Wayns) and two players many feel were deserving of that honor (Fisher and Yarou). In Mike’s September 18th post, Different Looks in 2009-10, he can hardly contain his enthusiasm as he explores the many lineup options available to Coach Wright with a team so deep. Notwithstanding the benefits of so many talented players, with depth comes the challenge of finding enough minutes to keep each player happy while establishing the rhythm and chemistry needed to go deep into March.

Perhaps there is a lesson to be learned from another Wildcat team, Rick Pitino’s 1995-96 NCAA Champion Kentucky Wildcats. That team was arguably the deepest in college basketball history, tying the unofficial record with nine players who eventually would play in the NBA. Five of the nine — Antoine Walker, Tony Delk, Walter McCarty, Derek Anderson and Ron Mercer – were first-round picks. With so many stars, how was Rick Pitino able to make that team gel?

An article published by ESPN discussing the all-time greatest college basketball teams (which ranked the 1995-96 Kentucky team second behind the Lew Alcindor’s 1968 UCLA Bruins) quotes Coach Pete Gillen saying, “How did Pitino kept freshman Ron Mercer happy playing only 12 minutes a game? Mercer was the No. 1 high school player in the country. Rick’s got to be the greatest psychologist since Sigmund Freud. He could sell freaking snow to the Eskimos.” Gillen failed to mention 6-10 freshman center, Nazr Mohammed, who was good enough to become the twenty-ninth player selected in the 1998 NBA draft, yet played only 88 minutes over 15 games during the entirety of the 1995-96 season.

So it’s fairly obvious that psychology will need to be a big focus for Coach Wright to be successful melding so many talented players into a potential Final Four team. But are there other lessons can be learned from Rick Pitino’s handling of his team that season? We thought it might be interesting to compare the allocation of minutes among the players on the 1995-96 Kentucky team with our Wisdom of Crowds predicted minutes for the 2009-10 Wildcats. That comparison shows some interesting differences … and similarities.

Discrimination on Basis of AGE 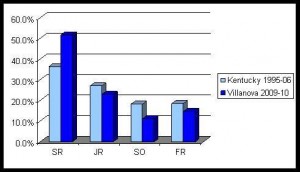 Discrimination on the Basis of SIZE 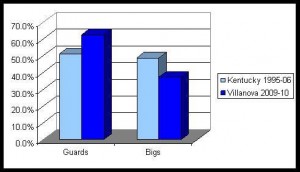 The VUHoops Crowd thinks that Jay Wright will return to his four-guard set, with 42% of the available minutes going to Reynolds, Fisher and Stokes alone. In 2005-06, Rick Pitino had a more balanced lineup, with available minutes split almost evenly between guards and bigs.

Discrimination on the Basis of PLURALITY 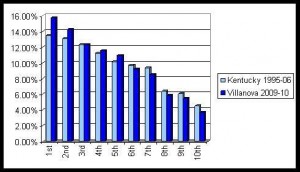 What conclusion can we draw from all of this? Perhaps Coach Wright will confidently move away from his historical bias toward upperclassmen and rely more on his freshmen than in past years. Perhaps he will not return to a four guard set, relying more on our bigs than the VUH Crowd predicts (particularly Pena, Yarou, and King) to provide a more balanced attack. Perhaps every team is different and “one size fits all solutions” simply do not apply. However, one can safely conclude that as Rick Pitino showed us an ten-plus-deep team can indeed work and go on to do great things. Let’s hope it works as well for Nova next season.