Risk of Underperforming The Preseason Hype

Share All sharing options for: Risk of Underperforming The Preseason Hype 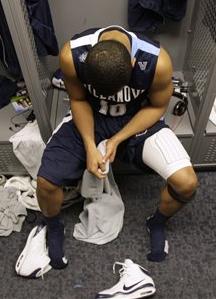 On Friday, Bleacher Report came out with its preseason Top-25, ranking Villanova #4 (yawn) saying "Scottie Reynolds will emerge to replace Dante Cunningham as this team's leader, but the Wildcats need freshman stud Mouphtaou Yarou to live up to the hype to account for Cunningham's inside scoring." Now, we know you guys have grown weary of the endless parade of meaningless preseason lists, but yesterday Bleacher Report came out with a doozie companion list! They evaluated their top 15 teams and assessed the probability of each failing to live up to its preseason ranking (think Notre Dame last season). They assigned a "fail factor" to each team on a scale of 1 to 10, where a "1" means only devastating injuries will keep the team from performing at a high level, while a "10" means the team has flaws not properly considered in the preseason ranking and is destined to perform below expectations.

Bleacher Report assigned a "5" failure factor to Villanova, indicating the Cats face a moderate risk of not living up to its preseason expectations.

Duke equaled Villanova’s risk, while 7 teams had a higher risk of failure (Tennessee was the highest) and 6 teams had a lower risk (Michigan State and Purdue lowest).  About Villanova, Bleacher Report said “The Wildcats lost several key seniors from last year's team and will need a freshman, Mouphtaou Yarou, to anchor the frontcourt.  If 'Nova doesn't recreate the success of a few years ago when using a guard dominated lineup, the Wildcats will not live up to the top five preseason ranking.”