Quest for Another Final Four

Share All sharing options for: Quest for Another Final Four 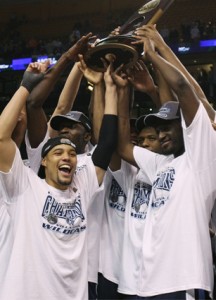 Dan Gelston of The Associated Press wrote an interesting article on the Wildcats as they kicked off their 2009-10 season this weekend. Here's some highlights:

"The first reminder of last season's Final Four comes with a glimpse at the rafters. The year 2009 had been permanently printed on a banner that already recognized the 1939, 1971 and 1985 Villanova Final Four teams.The next salute will come next week when last year's team will receive their Final Four rings."

"Coach Jay Wright wants the returning players to always remember that feeling of success only four teams each year get to experience. He also had a simple message for the Wildcats (30-8) at the first day of practice Friday: The Final Four was a great achievement, but it means little once the ball tips this year. "We're doing all the Final Four things now," Wright said. "Then we're going to say, 'That's it.' Let's get fired up about '09-'10. Let's put it behind us."

"Wright kicked off the season in his own way. He often preaches about his love of the Villanova Family, and nearly 100 members of the Philadelphiaand south New Jerseyalumni organizations were invited to watch a portion of practice. Wright brought several down from the stands and stationed them behind the basket to scream and wave their arms in distraction during a free throw drill. Wright raised his arms as he encouraged the die-hards to scream louder and throw off each Wildcat attempting a free throw."

"This year marks the 25th anniversary since the Wildcats improbably won the only national championship in the program's history. The '85 team will be feted at a game this year, likely at the Wachovia Center, and familiar stories will be swapped and famous faces will sprout a few more gray hairs."

"Everyone's going to judge them on whether they get back to the Final Four, whether they win the national championship this year," Wright said. "That's on the outside. They have to be aware of that. We have to stick to who we are."

"Wright said the Wildcats strayed from their philosophy of attacking, driving and getting to the line and it cost them in their national semifinal loss to eventual champion North Carolina. The Wildcats rode an emotional high from earning a spot in Detroit and failed to handle the hoopla as coolly as Wright had hoped. "Carolina was very committed to playing their game," Wright said. "We didn't play our game. We let all the trappings get to us."