Share All sharing options for: Achraf Yacoubou Commits to Villanova 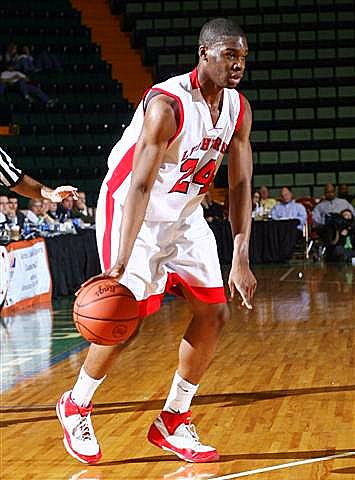 Achraf Yacoubou a 6'5" Shooting Guard from Long Island Lutheran has verbally committed to Jay Wright and the Villanova program.

Yacoubou is the first member of the 2011 Recruiting Class to commit to 'Nova. The Long Island native who averaged 21.3 ppg as a sophomore attended Kentucky's Big Blue Midnight Madness last weekend. The other finalists in the race for Ash were Kentucky and UConn.

The Point/Shooting Guard combo loves Coach Wright and what he demands from his guards. He made the announcement live on MSG Varsity's "A Quick 60" TV show today.

Yacoubou is ranked 76 by Rivals, and #69 by Scout. But with his recent performances, analysts only expect him to climb into the Top 20.

Welcome to the Villanova Family Achraf!

A recent ESPNU Analysis of Yacoubou:

Achraf is a solidly built shooting guard. He is tough and productive. Yacoubou is a natural scorer. He is a good but sometimes streaky shooter with range to 20 feet. He has some slashing ability but is best attacking from the perimeter. His strong body allows him to be a capable defender. He is also a good rebounder for his position. He is an average basketball athlete. Achraf needs to continue to refine the other parts of his game (ball handling and an in between game) but he is a good at putting the ball in basket.