As a non-student and young alum, I wasn't able to get into Hoops Mania on Friday night (but don't worry, I found something else to do). Although I couldn't enjoy the spectacle on Friday, I did manage to scoot over to the Pavilion after the football game on Saturday for the far-more-practical event: The Blue and White Scrimmage.

Seating was first-come-first-served and I managed to grab some really nice seats behind the scorers table just three rows behind a kid in a Toronto Blue Jays cap who I am 100% sure was 2010 recruit, Cory Joseph. There were a couple other recruits sitting down front that I wasn't able to positively identify. Michael Gilchrist was sitting across the aisle from the other recruits and appears to have brought a friend/chaperone (or two), who made him easy to identify by wearing his St. Pats gear.

Markus Kennedy was also in the arena. He wasn't sitting with the other recruits, however. He was walking around at times. During the autograph session, Taylor King was teasing him by calling him "Cas" and telling fans that Kennedy was former-Wildcat Casiem Drummond.

The Players were divided into two teams, Maalik Wayns played point (and seemed to have a pretty good handle on the system for a freshman) for the Blue team, while Corey Fisher started at the point for White. Scottie Reynolds, somewhat surprisingly (for me, anyway) played off the ball for the entire scrimmage, which seemed to signal that he will be primarily playing the 2 this season.

The white team bigs were Mouph Yarou and Isaiah Armwood, who both changed jerseys during the game. The young guys played well, though Mouph seemed to struggle from the free-throw line, hitting only one shot (though he got to the line a few times). Armwood showcased a nice midrange shot and some good athleticism during the game.

A number of team members showed off their three-point range, including Taylor King, Malik Wayns, Dominic Cheek and Corey Stokes. Stokes brought on a barrage of threes to keep the crowd entertained.

Mo Sutton and Antonio Pena both committed a number of fouls (mostly fouling Yarou, who was like a bulldozer on offense). It was a solid game from Pena in total, however, and his "shining star" moment was a thundering dunk he laid down in the second half.

The teams seemed evenly matched, a fact that was further evidenced by the fact that regulation ended with a tie (which the crowd loved because it meant they would play a 2 minute overtime). Ultimately the Blue team won; chalk that up to experienced leadership from Scottie Reynolds, or maybe to Pena's defensive presence or Stokes' three-point shooting. Either way, it was a fun time.

The intensity of the scrimmage wasn't watered down, there were a number of moments where the fouls were so hard that I was concerned about practice-injuries.

Reggie Redding was never in any danger, however, as he was not allowed to participate, though I did spot him in the arena, chatting with Brandon Stokes (aka "BiZz") and Frank Tchuisi. Redding was also not allowed to officially participate in the autograph session after the game, though a number of fans recognized him and got him to sign their posters anyway.

If anyone else was there, or has any questions, go ahead and hit the comments.

I apologize for this not being posted sooner, but I was driving back to Atlanta all day yesterday with my buddy Nick Marini '06. I will post some of the pictures that Nick took later, when I get a hold of them (including an excellent action-shot of the Pena dunk). 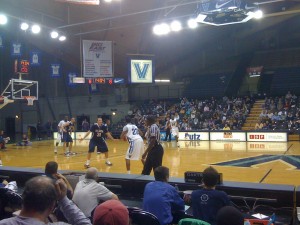 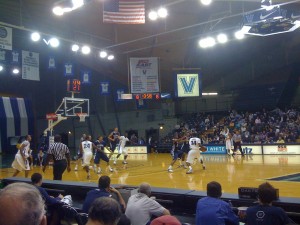 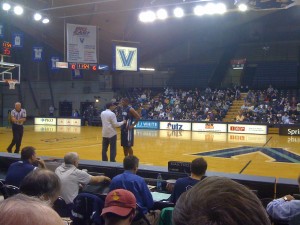 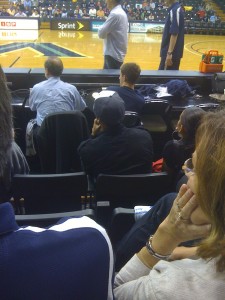 Cory Joseph watching (in the hat)