Share All sharing options for: Jay on Mouph Yarou 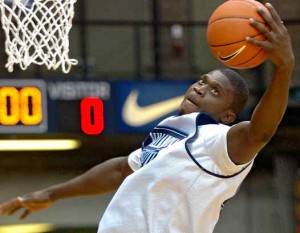 Jay Wright was on local 97.5 ESPN Radio yesterday. He talked about the question around Mouph Yarou's age.

We're right in the middle of working on it. Two days ago a sportswriter called us and said I found this FIBA Africa website and it had his name on it and had his birthdate as being 25.

Obviously It was the first time we ever hear do of it- we brought Mouph in, we asked him 'did you ever play on this team?', he said No, I don't know the name of the team...

We showed him the roster, 'do you know any of these guys?'  No. Is there any way you can call one of these guys and say "no I didn't play on the team" He said No, I don't even know these guys.

When something like that comes up it's serious. We have to do some research. We have his passport, his I-20 and all of that- his birthdate is 19.

We're working with the NCAA right now. The NCAA just needs to see it. And they said there's no reason to deem his ineligible. They feel good about it. Let him play on Friday. Then, when they see it, they'll make a statement.

Jay goes on talking about how international sites can't be too credible. He brought up the story that Mike Nardi's name, picture and stats were on the site of an Itallian team before his senior year.

In short Mouph is good to go. Villanova feels that they have all of their proverbial ducks in a row on this and that there should be no problem with the NCAA and Yarou's eligibility.