Sitting Down With James Bell

Share All sharing options for: Sitting Down With James Bell 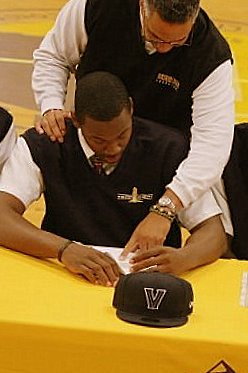 Earlier this week James Bell a 6'5" wing from Montverde Academy in Florida signed his National Letter of Intent to play college basketball at Villanova. We were able to catch up with James as he told us about his recruitment and shared his excitement about joining the Villanova Basketball Family.

Now that he's signed, he feels "that a lot of pressure has been lifted off of his shoulders" and he knows that he has something amazing to look forward to when he graduates. Playing college basketball has always been a dream for him and his parents.

Why did he pick 'Nova? James says, "It's a place were I can challenge myself on the court. And academically it's a great school. Plus, I have the chance to play for one of the best coaches in the country."

Being originally from New Jersey he adds, "it's like I'm going back home."

This season Bell is going to work on all aspects of his game, but concentrating on finishing in traffic, his jump shot, and his ball handling. He adds, in true Villanova fashion- "you can never stop getting better," knowing that he will "get ready to come in and work hard."

It shouldn't be a problem for Bell to hone his skills, 3 other players from Montverde signed a National Letter of Intent so competition is tough and at a high level. His Montverde squad is ranked #12 in the country and will face a challenging schedule. His coach, Kevin Sutton, is one of the best and has Jay Wright's admiration who noted that "Coach Sutton has done a terrific job teaching James the game."

On Bell, Coach Wright added, "James is a tough, athletic guard who will add another dimension to our team." That athleticism has lead many recruiting analysts to rave about Bell saying that "he is an explosive athlete who attacks the rim with power."

Assistant Coaches Pat Chambers and Jason Donnelly were the first to make contact with Bell when he was in high school at Arlington Country Day School near Jacksonville, FL.

From Day 1 when he took his first unofficial, everyone, especially Corey Fisher and Maalik Wayns, "made him feel like family". Bell added that the recruiting process was good and "was pretty much over" after he took his first visit.

Bell is looking forward to heading to the Main Line in the Summer of 2010 and next season, "I'm most excited about getting a chance to compete at that high level and making the deepest run we can in the tournament."

We agree- the future is definitely bright for Villanova Basketball. And the prospects for continued deep runs in the NCAA Tournament will happen with additions to the Villanova Family like Bell.