One of the greatest honors in sports is to have your jersey retired, whether professional or college, one measure of an athlete's successes is whether his name and number are immortalized by a former team. Villanova has honored 18 coaches, players and one trainer in this fashion.

The coaches were legendary on the Main Line: Al Severance, Jack Kraft and Rollie Massimino, each contributing to the storied history of the program. The trainer, Jake Nevin, was given the number 1 on his retired jersey in 1984 and has been credited with inspiring the Wildcats to fight their way to the national championship in that year.

Surely some day the jerseys of Wildcats like Randy Foy, Allan Ray and Scottie Reynolds will hang from the rafters above the student section because of their many accomplishments as Wildcats. I have no doubt that the Athletics department won't hesitate to bring the pomp and circumstance to the Pavilion in order to properly honor these Villanova legends. 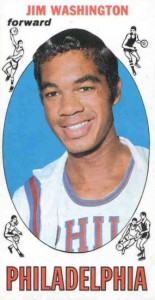 Not all of the Villanova greats who came before those men have been properly honored, however. One in particular stands out in my mind: Jim Washington.

"Jumpin Jimmy" Washington played for Villanova during Jack Kraft's tenure as coach before entering the NBA in the 1965 draft. Washington was a 6'6" forward who collected 1194 career rebounds at Villanova, making him second all-time in that category at Villanova (eclipsed only by Howard Porter who remains atop the list). He averaged about 14 rebounds per game, just slightly less than Porter's 14.8 rpg. Washington scored 1146 points in his college career, averaging 13.5 per game.

Washington also holds Villanova records for the highest single season rebounding average (15.8 in 28 games). He is tied with Easy Ed Pinckney and Howard Porter for the 9th best single-game rebound total in team history (22 rebounds vs. LaSalle in 1963). He holds two of the top-10 highest single-season rebounding performances (as well as #11) in school history, the only player to match or beat that was Howard Porter. His 1964 NCAA tournament featured the best rebounding performance in tournament history for Villanova when he pulled down 19 rebounds against Providence.

It is all made more impressive by the fact that unlike many of the players that came after him, Washington didn't get to play as a Freshman.

He was a stand-out player during his time on the Main Line, and that carried over to his NBA career, where he became the first member of the Chicago Bulls to average more than 10 rebounds per game. At the end of his NBA career he had averages of 10.6 points and 8.6 rebounds per game. To this day, no Villanova alumnus has topped his 6,637 career rebounds in the NBA.

Jim Washington didn't play in this era of basketball, but he was a dominant figure in his own era. Today he lives in Atlanta where he recently worked as a Community Affairs Liaison for the Atlanta Hawks. He still follows Villanova basketball.

It is about time that Villanova recognized Jim Washington by immortalizing his name in the Pavilion.

Update: To add a little bit of fuel to the fire... Jim Washington IS in the Big 5 Hall of Fame.