Share All sharing options for: Nova Drops 103 to Beat Penn 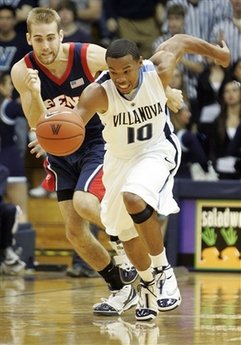 Villanova entered the Big5 season with a 103-65 win over Penn. After going up 20-5 midway through the first half.

Freshman Maalik Wayns led Villanova (2-0) in scoring tonight with 16 points. Scotie Reynolds, Taylor King, and Corey Stokes each added 14. While Antonio Pena recorded the first double-double of the season with 12 points an 10 rebounds.

The Wildcats shot 58.7% from the field including 11-21 from behind the arc to extend their Pavilion winning streak to 30 games.

Nova is next in action on Thursday against George Mason in the Puerto Rico Tipoff.