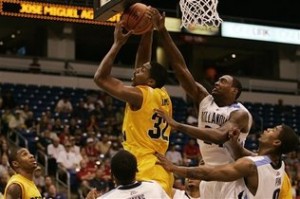 Freshman Isaiah Armwood took one shot against George Mason; that 3-Point attempt went in with 24 seconds to go and gave Villanova (3-0) a 69-68 win in the first round of the Puerto Rico classic.

The Cats were down by as much as 13 in the first half and found themselves in a 9-point hole at the intermission.

Scottie Reynolds paced 'Nova with 18 points (along with 10 turnovers). Corey Fisher ended up with 17 based on 14-18 from the charity stripe, and Antonio Pena recorded his second consecutive Double-Double with a 10 Point-12 Rebound effort.