Checking in On Randy

Share All sharing options for: Checking in On Randy 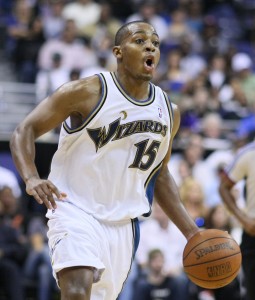 Almost a month into the NBA season, we thought we would take a look at how Nova fan-favorite, Randy Foye, was playing with his new team, the Washington Wizards. Foye will be earning $3.6 million from the Wizards this season.

After the Wizards won two of their first three games, pundits were calling them "a very formidable team in the East. However, they've since been cursed by injuries at guard including Mike James (broken finger), Mike Miller (sprained shoulder), Javaris Crittenton (foot) and Gilbert Arenas (calf ). Randy joined the walking wounded on November 10, leaving the Miami game with an ankle sprain. He returned to the lineup on November 18, but has played only 14 minutes in two games since his return, scoring one point.

Prior to his injury, Randy was playing well, starting two of the first seven games, averaging 29 MPG and 13 PPG.   The chart below takes a closer look at his game-to-game performance.  Prospects are good for Randy to see ample playing time once he is back to full strength.

Foye’a Game Statistics Through November 8 (Prior to Injury) 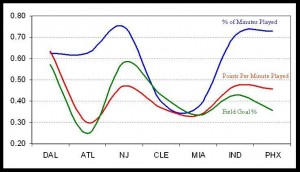