Share All sharing options for: 2009-10 Season "Closest to the Pin" Contest 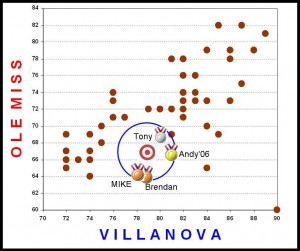 Based on the huge VUhoops.com reader response to our "Predict the Score" contest for the Ole Miss game, the editorial staff at VUH has decided to run a season long "Closest to the Pin" contest. The rules and prizes are explained below.

First Place:  Two tickets to the Saturday, March 6 showdown with West Virginia at 12 NOON at Wachovia Center (lower level, Section 103) and a Villanova basketball jersey autographed by a prominent member of the Villanova basketball family and personalized with your name.  Note: At the request of the autograph signer, we cannot disclose his name, but promise that this will be something you be proud to display!)

Third Place: Attitude of a Champion: The 2008-2009 Villanova Wildcats DVD