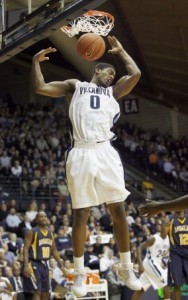 Villanova couldn't break LaSalle until 25 minutes into the game when the Wildcats went on a 16-5 run in the second half.

'Nova (6-0) was paced by Scottie Reynolds and Antonio Pena who both contributed 14 points in the win. Corey Fisher added 13 points (and 6 steals) and freshman Dominic Cheek finished with 10 due to his energetic and athletic play. This is the Wildcats 2nd Big 5 win of the season.

Even though Villanova shot poorly from behind the arc (6-24 3FG) against LaSalle's zone defense, the 'Cats's full-court pressure caused 27 LaSalle Turnovers. The Explorers also out-rebounded 'Nova, 46-27.

The win, is Villanova's 30th consecutive victory at The Pavilion.

The Wildcats will play Drexel on Wednesday.

Prior to the game we heard rumors that Senior Walk-on Jason Colenda had left the team "to focus on receiving his degree," at this time, we can now confirm this.