Closest to the Pin - Round 4 (Maryland)

Share All sharing options for: Closest to the Pin - Round 4 (Maryland)

The window is now open for reader predictions in round 4 of our Closest to the Pin Contest, featuring Maryland. Refer to our 2009-10 "Closest to the Pin" Contest post for contest rules and prizes. After three rounds, Pete holds first place with 10 cumulative points, followed by Andy ‘06 and MIKE with 6 points each.

UPDATE:  SUNDAY 7:40 PM (Game Time):  The window is now closed.  The Vegas Odd-Makers are calling this one close, with the spread widening from this morning to Nova (-2.5).  The final over/under is 147 points.  A total of 83 VUH posted picks for Round 4 (two predicting a Maryland victory).  Collectively, the readers see Nova winning 77-70 (a margin of 7 points).  The irrepressible BossHogHazzard, never one to follow the crowd and always true to his unbridled optimism regarding Nova basketball, is predicting a 103-52 Nova win.  His prediction does not appear on this most recent version of the chart, below, given its reduced scale.  Good luck to you all, and Go Cats! 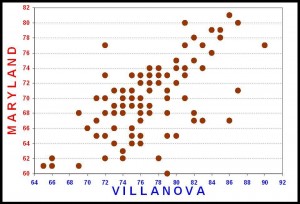