What the Terps are Chirping

Share All sharing options for: What the Terps are Chirping 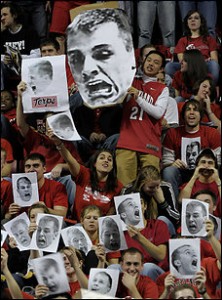 As a supplement to our upcoming pre-game matchup, we thought it would be interesting to take a look at the pregame thoughts from Maryland's perspective. With thanks to Ben Broman at the outstanding Terp Blog, "Testudo Time," here's some excerpts of what the Maryland fans are saying:

"Villanova is a very good team, but remember that, before that Final Four run last year, they were down by 11 to American in the second half in the first round. This year has seen some ups and downs for the Cats, too. They only beat George Mason and had an unconvincing victory over Dayton."

“Villanova is not  untouchable. Believe it or not, Maryland's actually ranked higher in the Pomeroy rankings; Villanova's at 51. Maryland's also higher in both offensive and defensive adjusted efficiency rankings”

“The matchup of the day will be Greivis Vasquez-Scottie Reynolds, a battle royale between two premier senior PGs. Reynolds is a bit of a chucker, but he's quick, and quick guards usually give Vasquez fits. If the Vasquez of old (that is, last year) shows up, it'll be highly entertaining. If the Vasquez of this season shows up, Nova will probably have an advantage in the PG category.”

“One big plus for the Terps against Nova is that Villanova lacks a dominating inside game, meaning the freshman bigs shouldn't be overwhelmed entirely. Villanova's premier post player, Antonio Pena, shouldn't provide a greater challenge than Cincy’s Yancy Gates. In the absence of Mouphtaou Yarou, Jordan Williams will be at an advantage for once in this season against Maurice Sutton, and Maryland matches up well with the shorter Wildcats. Of course, Maryland doesn't really have an answer for ultra-quick, foul-drawing PG Scottie Reynolds or solid post player and rebounder extraordinaire Antonio Pena. Pena's one of the best rebounders in the nation, but they're thin outside of him.”

“When Sutton is not on the floor, it'll likely be a four guard set for the 'Cats, and that's pretty good for Maryland, who runs the same set.”

“Defensivelyis where Villanova has made their living, but it's been against poor teams that they've been able to outclass athletically. They're definitely above-average on that side of the floor.”

“Actually, I'm yet to find one real reason to be afraid of Villanova other than the fact that they went to the Final Four last year, and even that they did with Reggie Redding, Dwayne Anderson, Shane Clark, and Dante Cunningham, none of whom will be on the court on Sunday.”

Here’s what a poll of Terp fans (222 voting as of 11AM on Saturday) are predicting: