Share All sharing options for: Closest to the Pin Contest -- St. Joe's 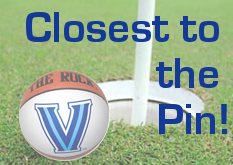 The window is now open for readers to post their predicted scores against St. Joseph's in Round 5 of our Closest to the Pin Contest. Refer to our 2009-10 "Closest to the Pin" Contest post for contest rules and prizes. After four rounds, Pete is in first place with 13 points, followed by Andy ‘06 with 11 points and MIKE with 6 points.

UPDATE: Wednesday 9:00 PM: A record 111 VUH readers posted picks in Round 5 (none predicting a St. Joe's victory). Collectively, the readers see Nova winning 84-67 (a winning margin of 17 points and implied over/under of 151). The Vegas odds-makers initially predicted a win by Nova by 13.5 pts; the spread increased over the day to 16.5 points; the over/under was 147. See below for our scatter chart depicting the 111 readers predictions. 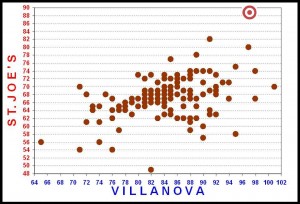