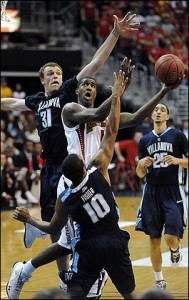 I've gone through and compiled some statistics and where 'Nova is ranked in the nation...

when to see that our rebounding is 19th in the country. Not bad for "Guard U", huh? This is a direct result of Jay Wright's philosophy of everyone hitting the glass hard- guards included.

Defensively...? These numbers aren't very indicative of Jay's defense-first mentality. The squad is still young and this will only improve as the Freshman learn 'Nova's complicated Defensive Schemes. If there is a bright side, one thing that this does highlight is Nova's pure ability to score- I don't think anyone doubted that the Cats could score, but the lacking defense has forced VU to simply outscore their opponent.

What do you think?