Share All sharing options for: A National Championship preview 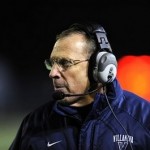 The top seeded Grizzlies from the University of Montana (14-0) will take on our Wildcats at Finley Stadium in Chattanooga, TN tonight. The game is slated for ESPN2 (in HD) with an 8pET Kickoff.

The Griz are a 1-AA rock- this is their sixth trip to the National Championship where they have won twice- the last time in 2001.

Villanova (13-1) is battle-tested. They have played and beaten conference foes Richmond, William & Mary, New Hampshire, and Delaware- all teams who were in the Top 10 of FCS Football this season. Head Coach Andy Talley realizes this, but also respects the Griz, "We're just so battle-tested, with the animals we've played. I don't think they can be any better than anybody we've already seen."

The Key for Montana will be the need to stop All-Purpose receiver and All-American Matt Szczur. He has 4 touchdown receptions, but has also thrown for two out of the Wildcat formation. On top of that, he's rushed for 8 TDs and returned a kickoff for one. Also, Quarterback Chris Whitney 'Nova's  leading rusher, with 885 yards and six touchdowns on 187 carries. He's thrown for 1,794 yards and 17 TDs, completing 63.7 percent of his passes.

For Villanova, Andy Talley noted that he hasn't "seen alot of weaknesses from Montana ... aren't any weaknesses, the big thing they have going for them is their coach and coaching staff, frankly, they do a phenomenal job of coaching ..."

Only 3 private schools have won the football national title- Furman in 1988 and Richmond in 2008.