Share All sharing options for: Op / Ed: Reasonable Thoughts from An Unreasonable Man 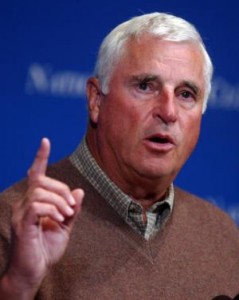 Say what you want about Bobby Knight, former Indiana and Texas Tech coach who is now an analyst for ESPN. Always the poster boy for anger management therapists, one can never say that Coach Knight does not speak his mind. That virtue was on full display last week during a fundraiser for the Indiana Basketball Hall of Fame.

Knight said that integrity is lacking in college basketball and cited Villanova fan-favorite, John Calipari, as the prime example. Knight questioned why Calipari is still still permitted to coach given the shame he has brought to the game and the programs he has led. Massachusetts and Memphis were both sanctioned by the NCAA for violations committed during Calipari's tenure.

"We've gotten into this situation where integrity is really lacking and that's why I'm glad I'm not coaching," Knight said. "[W]e've got a coach at Kentucky who put two schools on probation and he's still coaching. I really don't understand that."

Knight also criticized a proposed tournament expansion to 96 teams, saying nobody should get a bye in the NCAA tournament.  He urged the governing body's administration to require tournament teams to submit eligibility reports, an effort to assure that players who are competing in postseason games have been attending classes and earning acceptable grades.  "Very few people know this, but a kid can play the first semester as a freshman, pass six hours of anything and play in the NCAA tournament without ever attending a class in the second semester. I don't think that's right."

Have I mentioned lately how happy I am that Jay Wright coaches the Cats?