Closest to the Pin Round 8 - Delaware

Share All sharing options for: Closest to the Pin Round 8 - Delaware

Update:  Wednesday, Dec. 23, 7:05 PM (Gametime):  A total of 73 VUH readers  posted picks in Round 8 (none predicting a Delaware victory).  Collectively, the readers see Nova winning 93-63 (a winning margin of 30 points and implied over/under of 156).   The Vegas odds-makers favor Villanova by 29 points with their over/under dropping a point since this morning to 148.5, or an implied score of 89-60.  Hit the "read more' button for a statistical summary of Delaware's year so far and our scatter chart depicting the readers’ predictions.  You should also check out Brian's game preview. 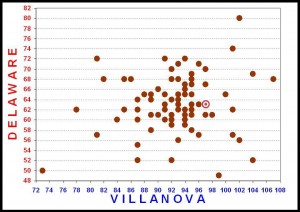 Window Opening:  Monday, Dec. 21, 8:00 PM.   The window is now open for readers to post their predicted scores for the Delaware game in Round 8 of our Closest to the Pin Contest.  After seven rounds, Pete is in first place with 14 points, Andy ‘06 in second place with 11 points, and Jim K has moved into third place with 9 points.