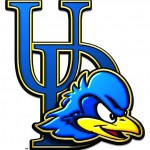 Yes, Virginia, there is a University of Delaware basketball team. The Blue Hens hoops squad is at 3-7 (0-1 conference) so far this year, and is poised to stick around at the bottom of the CAA conference all year. Unranked (and unvoted-for) in every poll except the Schuylkill 16 -- where they were saved from last-place by awful Penn and Delaware State teams -- this is not the kind of team that Jay Wright loses sleep over. In fact, I think that the team would be more concerned if they were going to be playing the Delaware women on Wednesday (6-3 with big time talent).

As we all know by now, however, you can't look past even a weak team like this. We will be playing the male Blue Hens basketball team this week. Lets look at what the pride of Newark, DE will be throwing at us:

UDel is lead in scoring by two guards, Jawan Carter (17.3 ppg) and Alphonso Dawson (11.1 ppg). Their leading rebounder is forward Kelvin McNeil at 6.9 rebounds per game. Carter, who transferred from St. Joes, may be the key to their offense, however, since he also leads the team in assists (Brian Johnson, who is out for the season with a torn ACL, was considered one of the best pure point guards in the CAA).

Coach Monte Ross has lost about twice as many games at Delaware as he has won. Last year's team finished below .500 and this year doesn't look to be any better. This year's team has three close wins against the worst UPenn team in recent memory (97-94), Hampton (55-52), and Vermont (56-50). Their losses have come to respectable or good teams like Temple, Bucknell, Siena, as well as bad ones against the likes of in-state rival, Delaware State (4-5 on the season... UDel was their last win before taking 4 straight losses).

This year  in about 10 games, the Blue Hens have averaged 11 assists to 17.1 turnovers per game (with Carter, the leading assist man, leading the charge on turnovers as well). That's a ratio that Villanova will undoubtedly capitalize on.

Delaware has four players above 6'6" tall and all of them are Freshmen or Sophomores. The backcourt is the strength of this team, but if they continue to turn the ball over at a high rate, they won't be any match for the Wildcat backcourt featuring a positive assist-turnover ratio and the ability to convert turnovers into points.

Last year the Delaware bigs took a major back seat to the  guards, and while this season seems to be a more balanced offense, with Guards taking 60% of the shots (compared to about 91% last year), it is clear that Delaware is a guard-oriented team. Shot selection is still a problem for the Hens, however, shooting 39.3% from the floor and an abysmal 26.8% from beyond the arc.

A guard-oriented team that doesn't really light it up with their shooting is a pretty favorable match-up for the 'Cats. They shouldn't be able to overpower us with size, and even if we keep leaving a shooter wide open in three-point-land, it would appear unlikely that UDel will be able to take advantage of that. This should be another big win, held back only because Coach Wright will undoubtedly spread the minutes out to get the kids (and Wooten) some more minutes before the Big East schedule begins.

Don't forget to submit your guess in Ed's Closest to the Pin Contest!