Updated Thursday, December 24, 10 AM Villanova extended its winning streak at the Pavilion to 33 games with a 36-point win over Delaware, 97-63 in a final tune-up before its conference opener at Marquette on January 2. Scottie Reynolds led all scorers with 22 points, his fifth 20-point game of the season. Taylor King had his first double-double of the season with 19 points and 12 rebounds. Reggie Redding scored 16 and grabbed 6 rebounds, and Corey Fisher scored 14 points, had 4 assists and grabbed 5 rebounds. Villanova shot 54% from the field, 52% from 3 point range, and 86% from the free throw line.

The game was, frankly, much closer than expected for the first 26 minutes of play. Delaware closed within 6 points on a tip-in by Kelvin McNeil with 15:19 left in the second half. However, Scotty Reynolds hit a 3-point shot a few seconds later, and Nova never looked back.

Reggie Redding continued his strong play since returning to the lineup.  After scoring 15 points and grabbing 9 rebounds against Fordham, he encored with a 6-of-7 effort, 16 point effort and  grabbed six rebounds against Delaware.   AP quoted Jay Wright after the game saying, "[Reggie’s] just been so consistent every day at practice.  Our second team would beat our first team because he'd make a play. He just kept it going in the Fordham game and every day of practice leading up this game."

Maurice Sutton missed the game with an upper respiratory infection.  Mouph Yarou continues to be sidelined as he recovers from hepatitis B. 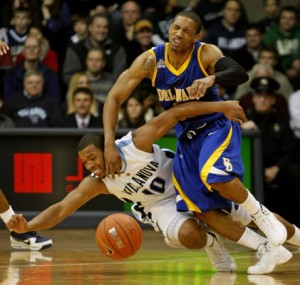 "You're not picked to finish No. 1 in the Big East for no reason," Delaware coach Monte Ross, the former Saint Joseph's assistant, said of the Wildcats. "It looked like they were playing with eight guys all the time. They have more answers than most people have questions."

"It felt great, just to have the opportunity to play again," said Redding, who received the loudest ovation when the starting lineups were introduced. "I want to give something back to the Villanova community, for giving me another chance. It was good that I was allowed to practice. Practice sometimes is as tough as games. Every day, I did a little extra work. I think I'm in pretty good shape, but I still have work to do."

"Everybody's going to come after us," Wright said. "I want our guys to be prepared for that. The Big East is the Big East, man. One day at a time, it's a grind. I mean that in a fun way. You have a battle, and there's another one waiting for you."

"I think the defense needs to get better," Wright said. "We're getting there, though. We have to get a feel for each other defensively. We try to play together defensively off each other. We're not really good at that yet, but I do think we're going in the right direction."