Now that we've had a week to savor winning the FCS football championship, Villanova fans already are debating whether it is time for 'Nova to make the jump to the Big East football conference. Let's take a look at what upgrading actually means.

The NCAA uses two criteria to determine whether a school qualifies for Football Bowl Subdivision (FBS) membership -- attendance and number of scholarships.

Attendance   The NCAA requires a minimum average attendance of 15,000 per home game.  According to a 2008 NCAA report, Western Kentucky, which completed its second year of a two-year transition to Division I FBS in 2008, averaged 16,500 fans per game, the least in the FBS.  Villanova Stadium, built in 1927, has seating capacity of only 12,500 and would need to be expanded by at least 2,500 seats to make the jump to the BCS.  But first, Villanova would need to figure out how to put more cheeks in its existing 12,500 seats.  According to the NCAA, Villanova averaged only 8,364 fans in its five home games in 2006.  Despite the excitement of its 2009 FCS Championship season, unconfirmed reports indicate that Nova's average attendance actually dropped 15% this year to just over 7,100, less than half what is required for FBS membership.  Worse yet,  the attendance at its FCS semi-final game against William & Mary was less than 6,000 fans, although exams and bad weather likely were contributing factors. 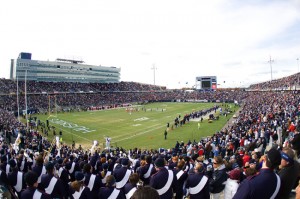 How Long Does It Take to Be Competitive?   UConn has been wildly successful since moved up to  Division I-A status in 2000 and became a full Big East member in 2004.  However, taking that step cost Connecticut taxpayers $91 million to build the 40,000-seat Rentschler Field football stadium.  UConn draws almost 35,000 fans each game. The Huskies achieved their first bowl victory in the 2004. In 2007, the football team recorded its first national ranking, climbing as high as 13th in the BCS standings, the second-fastest ascent in the national polls by a new Division I-A team.  UConn played in the Meineke Car Care Bowl in 2007, The International Bowl in 2008, and will face South Carolina in the Papa Johns Bowl on January 2.  Unlike UConn, Villanova does not have financial backing from the State, and would likely take much longer than Connecticut to become a bowl-caliber team.

Financial Realities in the Current Economy    The NCAA recently published the results of a financial review of NCAA athletic programs entitled, “Revenues and Expenses of Division I Intercollegiate Athletics Programs Report for Fiscal Years 2004, 2005 and 2006.”   Key findings from that report would seem to dampen enthusiasm for a jump by Villanova to Division I BCS in the near term, at least from an accountant's perspective.  Consider:

For the three-year period 2004-2006, only 16 of the 119 FBS football programs turned a net profit.  Excluding the 16 profitable programs, the average loss was $8.9 million and the loss grew each year during the three year period.  Dick Weiss of the NY Daily News wrote an article last August claiming Villanova’s football program lost $4 million in 2008 competing at the less costly FCS level.

Two revenue sources account for over fifty percent of total football revenues – ticket sales and contributions from alumni and others.  For Villanova, ticket revenues would be constrained for years, as the school likely would need to cut ticket prices and offer more free tickets to increase average attendance to 15,000.  Furthermore, with a strong alumni bias in favor of basketball, the football program is unlikely to generate significant alumni support for years to come.

Two expense line items account for approximately fifty percent of total expenses – salaries and grant in-aid. For Villanova, the investment needed to jump to FBS will add costs in the form of additional football scholarships (approximately $1 million additional cost) plus the costs of financing the expansion of the existing stadium.

The Flutie Effect    Of course, the financial implications of the decision to jump or not to jump are more complicated than they might appear on an accountant's ledger.   One fact in favor of joining the Big East football conference is The Flutie Effect, which refers to the surge in student applications for admission experienced by Boston College after Doug Flutie completed his Hail Mary pass to Gerard Phelan to beat Miami in 1984 in one of the most memorable moments in sports history.  However, one might argue that Villanova does not need football to garner similar benefits.  Studies have shown that schools that make the NCAA basketball tournament will net an average 1 percent bump in applications the following year; schools that make it to the Sweet 16 in the NCAA tournament see an average 3 percent boost in applications; and the national champion is likely to see a 7 to 8 percent increase.  Villanova's Admissions Office recently reported that it may do even better after 'Nova's Final Four showing last April, receiving over 8,000 applications for early action this year, the highest number of such applications ever received by the the school.

Play Big East Football Or Leave    I was unable to confirm claims made on VUH that the Big East  conference will require its basketball schools to field Big East football teams within the next few years if they wish to remain in the basketball conference.  If true, Villanova could find itself on the outside looking in unless begins moving in that direction soon.  However,  if it doesn't make the jump to Big East football, it likely will be in good company.  Notre Dame is a football powerhouse that cherishes its independent football status.  Georgetown fields a very weak (0-11) Patriot League football team that offers no football scholarships.   Marquette fields only a club football team.  St. Johns, Seton Hall, DePaul and Providence do not have football teams.   Besides not playing Big East football, these seven teams share a common bond with Villanova through their affiliation with the Roman Catholic Church.  A new "Saint's Conference" made up of those eight schools and possibly other Catholic colleges in the Northeast (e.g., Boston College, Dayton and St. Joseph’s) could rival what would remain of the Big East  basketball conference.

All considered, a jump by Villanova to Big East football appears impractical for the foreseeable future.  However, if 'Nova fans really want the program to move that direction, 12,500 of them need to start showing up for every home game next season.  Only then should the Board of Trustees begin consideration of a larger stadium and a financial commitment needed to make the jump to big time football.

We'd like to know what you think.  Please vote your mind below on whether 'Nova should make the jump to Big East football, and use the comments section to tell us why.   Let the debate begin!