Share All sharing options for: University of Idaho's Kibbie Dome

In the context of the debate over the wisdom of joining the Big East Football Conference, Brian suggested building building a domed stadium on the site of Villanova Stadium using a design similar to the University of Idaho's Kibbie Dome. I took a closer look at Kibbie Stadium. Here's what I learned:

Kibbie Dome opened as an indoor stadium in September 1975. Its barrel-arched roof and vertical end walls, made primarily of wood, enclosed an outdoor concrete football, Neal Stadium, which was built in 1971.  An engineering marvel, Kibbie Dome roof is made up of beams of laminated wood on a framework of tubular shaped steel. These huge arches span a distance of 400 feet and at the center height are 144 feet from the surface of the turf. The roof was completed in 1975.  The  East End houses departmental offices, locker rooms, a weight room, equipment rooms, and both men's and women's varsity locker All in all, the total cost of construction of the Kibbie Dome and the East End project was over $12 million dollars, or close to $30 million in today’s inflation adjusted dollars. 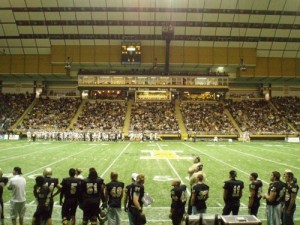 Seasonally, the Kibbie is used for football, basketball, soccer, track and field, and tennis. In addition, physical education classes, intramural sports, club sports, and ROTC training occurs year round in the Kibbie. Kibbie "special events" include the university commencement, concerts, conferences, trade shows, a circus, and any other unique events that can be scheduled.

Turf Surface: The artificial football field (the "Magic Carpet") is designed to roll out in approximately 2 hours or roll in within 1 hour. This magic is accomplished with the help of forced air, large rollers, and ten winch lines.

The cost of $30 million strikes me as something that is doable.  However, building the equivalent of a 14 story building on Lancaster Avenue does not.  I do think a facility of that size could work well for basketball, football, track, soccer, lacrosse, concerts, commencement exercises.  It could be great addition to the school if a site within 15 minutes of the University could be located (easier said than done).