#6 Villanova (14-1, 3-0 BEC) vs. Louisville (12-4 overall, 3-0 BEC), Monday 7PM, ESPN. Louisville has gotten off to a good start in Big East play with a 3-0 mark. However, don’t read too much into their record as they don’t have anything close to a signature win so far this season. Their three Big East wins have been over South Florida (+21), Providence (+22), and St. Johns (+7). Their four losses have come at the hands of out-of-conference foes UNLV (-5), Western Carolina (-8), Charlotte (-22), and Kentucky (-9). However, before ‘Nova fans start looking past this game, it is noteworthy that the game will be played in the always difficult Freedom Hall, where Louisville is 10-2 this season, including six straight wins.

For the first time in recent memory, Louisville is not ranked and is not close to the team it was last year, when they won the Big East Championship.  Gone are guards Terrence Williams and Andre McGee, as well as forward Earl Clark.  This season, Edgar Sosa (who has his own room in Rick Pitino's doghouse) has played effectively at the point and Samardo Samuels has done a good job of stepping up inside. Nevertheless, most believe that the 2010 Cardinals simply don’t have the talent to compete with the top echelon teams this year, and are more likely to be playing in the NIT than the Big Dance in March. 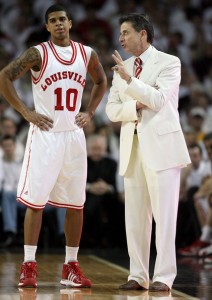 In past years, some would have given Louisville the edge in this game simply based on the reputation of Rick Pitino as head coach.  Pitino, of course, is among the top-ten most winning active NCAA coaches.  However, Pitino has been a distraction for his team this year since admitting in August that he had consensual sex with Karen Cunagin Sypher, the wife of Louisville equipment manager,  in a Louisville restaurant. 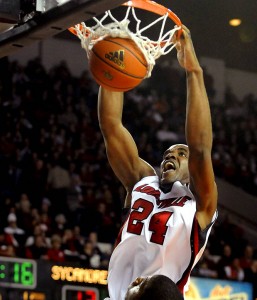 It's never easy playing in Louisville, but this match-up ultimately favors the Cats.

Don't forget to post your final score prediction in our Closest to the Pin contest.