Villanova Gets by Georgetown

Share All sharing options for: Villanova Gets by Georgetown 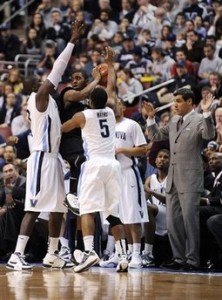 Despite surrendering a 15-point lead at the half Villanova pulled out an 82-77 victory over Georgetown this afternoon at the Wachovia Center.

Behind 27 points from Scottie Reynolds, the Wildcats improved to 16-1 (5-0) and ends a 5-game skid against the Washington DC school.

'Nova shot poorly from the floor in the second half (including going 6 and a half minutes without scoring a basket), but Georgetown's lack of roster depth and foul trouble proved to be too much for the Hoyas to overcome.

Maalik Wayns and Reggie Redding each had 11 points for 'Nova. Corey Fisher added 10.

Villanova returns to action on Wednesday night at the RAC when the take on Rutgers.