Closest to the Pin Round 14 -- Rutgers

Share All sharing options for: Closest to the Pin Round 14 -- Rutgers

Update:  Wednesday, Jan 20, 8:00 PM (Game Time)    A total of 68 VUH readers posted predictions (none predicting a Rutgers victory).  Collectively, the readers see Nova winning 89-70 (a margin of 19 points and implied over/under of 159).   The Vegas odds-makers see the game a bit closer, favoring the Cats (-14), with the over under set at 155, implying a final score of 85-71.  See below for the scatter chart depicting the VUH readers’ predictions as well as statistical information on Rutgers.  Boss Hog's prediction of 127-54 has been confirmed and accepted, but did not quite fit on the chart. 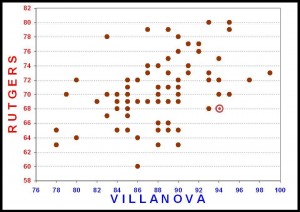 Window Opening: Monday, Jan. 18, 9:00 PM. The window is now open for readers to post their predicted final scores for Wednesday’s game against Rutgers in our Closest to the Pin Contest.  After thirteen rounds, our leader board shows Andy ‘06 in first place with 17 points, Pete in second place with 15 points, and Barney Rubble ‘87 and Ed ’77 tied in third place with 10 points.

We’ll post our game preview and the Las Vegas spread / over-under by game day  NOTE: With VUHoops’ new commenting system, it is important for contestants to use a consistent handle/login so that we can keep an accurate running leader board over the course of the season. Obviously, score predictions posted by anonymous readers cannot be accepted.