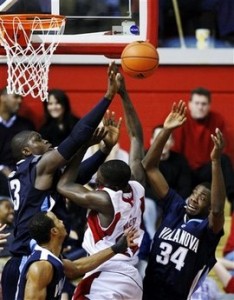 In a game that saw nearly the entire team play significant minutes, Jay Wright's Villanova squad led nearly from start to finish and the game was never really in doubt. Ten Wildcats played at least 10 minutes and nine of those 10 played at least 15, the lone exception being Taylor King who played 12, and only three players saw over 20 minutes.

Dominic Cheek led Villanova with 17 points off the bench after a late scoring run and guards Corey Fisher, Corey Stokes, and Maalik Wayns were also in double figures with 16, 13, and 11 apiece. Scottie Reynolds and Isaiah Armwood contributed 9 apiece and Mouph Yarou added 6 points and 9 rebounds off the bench. Antonio Pena also chipped in 5 and 9.

Freshman Dane Miller led all scorers with 24 points for Rutgers.

The win moves the Wildcats to 17-1, 6-0 in Big East play. Their next game will be this Saturday at noon against St. Johns (12-6, 2-4 in conference) at Madison Square Garden. With this win and Pittsburgh's loss to Georgetown, Villanova is now alone in first place in the Big East conference.