Share All sharing options for: Scottie Leads 'Nova in Win over St. John's 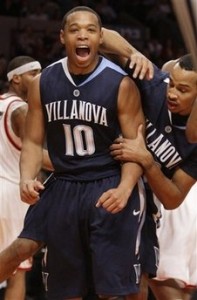 The 18-1 start includes a 7-0 start in Big East Conference play which has never been accomplished before by the Wildcats.

'Nova overcame an 11 point deficit late in the first half to be down only 1 point at the intermission. Whatever Jay said to the squad at the half, the team took it to heart. A combination of increased defensive pressure and cold shooting saw St. John's only shoot 11-38 (29%) from the field in the second 20 minutes.

Corey Fisher added 18 points for 'Nova and freshman Maalik Wayns contributed 16 with both shooting 5-8 from the floor.

Reynolds also led the team with 4 assists and 3 steals. Along the way he passed Randy Foye and moved in to the #8 spot on Villanova's All-Time Scoring List.

Villanova next faces Notre Dame on Wednesday at 7p.