Closest to the Pin Round 16 -- Notre Dame

Share All sharing options for: Closest to the Pin Round 16 -- Notre Dame


Update:  Wednesday, Jan 26, 7:00PM (Game Time)    A total of 69 VUH readers posted predictions (none predicting a Notre Dame victory).  Collectively, the readers see Nova winning 87-77 (a margin of 10 points and implied over/under of 164).   The Vegas odds-makers see it much the same way, favoring the Cats (-11) in a high-scoring contest (over- under set at 165.5, implying a final score of 88-77).  Continue reading for our scatter graph depicting the VUH readers’ predictions as well as statistical information on Notre Dame.  Also note that Drew's predicted score of 'Nova 65- Irish 61 was accepted but did not fit within the scale of the scatter graph. 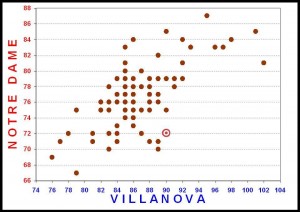 Window Opening: Monday, Jan. 24, 7:00 PM.   The window is now open for readers to post their predicted final scores in Wednesday’s game vs. Notre Dame in our Closest to the Pin Contest.  After fifteen rounds, our leader board  has Andy ‘06 in first place with 17 points, Pete in second place with 15 points, and tommyboy in third place with 11 points.

Keep an eye out for Brian's game preview, which should be posted shortly.  We’ll post the Las Vegas spread / over-under on game day.  Special Note: With VUHoops’ new commenting system, it is important for contestants to use a consistent handle/login so that we can keep an accurate running leader board over the course of the season. Obviously, score predictions posted by anonymous readers cannot be accepted.