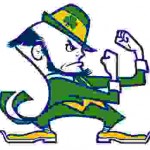 The Fighting Irish have been members of the Big East conference in all-sports except football since 1995. In that time, they have won a single Big East (west) title in 2000. They have not been to the Final Four since 1978 and have no national championships in the tournament era. Historically, two of their most notable achievements have been ending some of UCLA's Globetrotter-esque winning streaks in the 70s.

Notre Dame is currently one of four teams in the Big East with four wins, against Providence, USF, West Virginia and DePaul. They have also dropped conference games against Syracuse, Cincy and UConn.

After high expectations for last year's team were proven to be mostly overblown, this year's Notre Dame squad started the year with few expectations other than a Big East POY candidacy for star forward, Luke Harangody. While Harangody puts up gaudy numbers for the Irish, it may be because the Irish offense begins and ends with the man who takes about 32% of it's shots.

Coach Mike Brey is a proponent of the fast-paced 94-foot Motion Offense, designed to flow from the full-court to half-court while putting pressure on defenses. This is similar (but not the same) to the offensive scheme preferred by Jay Wright (and Paul Hewitt, Rick Majerus, etc.).  Their system features three outside players and two inside, creating a lot of screens allowing them to move the ball and create open shots.

Notre Dame played a lot of the Syracuse-style 2-3 Zone Defense in their win against West Virginia. That defense can usually be countered by a few adjustments to the usual Villanova offense. It requires some good guard play to break, which is hardly a challenge for the Wildcats, who still feature one of the deepest and most-talented backcourts in the country.

The Irish feature three players who average more than 30 minutes on the court, Harangody (35), Tory Jackson (35.3), and Tyler's little brother, Ben Hansbrough (33.6). A fourth player, Tim Abromaitis, averages 28.4 minutes. The 7-man rotation that Mike Brey has been using (and it really heavily favors the top-6 players), leaves the Irish as a pretty shallow team, compared to the 10 or 11 men rotated in by Villanova.

Harangody averages 24.7 points, 9.9 rebounds and 0.8 blocks. He has a negative assist-to-turnover ratio, committing an average of 2.1 turnovers per game. Shooting 49.7% from the floor and 77.4% from the free-throw line, Harangody's "flipper shot" has been strangely effective against college opponents.

Only two other Notre Dame players have been averaging double-digit points, Abromaitis and Hansbrough, with 16.7ppg and 11.7ppg respectively. Tory Jackson, who only averages 7.9 points, leads the team in assists with 5.8 per game, though Hansbrough is not far behind with 5.2, no other player on the roster comes close. With the ball in either guard's hands, the offense appears to perform well.

With three 6'9" freshmen on the roster, the Irish would appear to have a size-advantage in this game, but one of those three has not appeared in a single game this year, while the other two are averaging less than 5 minutes per game off of the bench. Of the remaining players, there are 6 players taller than 6'6" on their roster, the tallest of whom are 6'8", and you can expect to have up to three 6'8" players on the court at any time.

Harangody is a key to the success of this Notre Dame team. In three of their five losses this season, he  had accumulated four fouls. The Wildcat defense should pay special attention to Harangody, trying to draw fouls against him, and looking to get him to turn the ball over.

Despite Notre Dame's size, Villanova can be expected to win the rebounding battle in this game. The 'Cats must continue to hit around 49.6% of their shots (in conference games) in order to maintain pace with the Irish offense, and should strive to maintain control of the ball, since Notre Dame does a good job of protecting the rock. Another 19 turnover game may not be possible.

The game will be on a national broadcast on ESPN. Tipoff is slated for 7p from the Wachovia Center [Tickets]

Don't forget to get your picks in for Ed's Closest to the Pin Contest.