Nova In the News

Share All sharing options for: Nova In the News 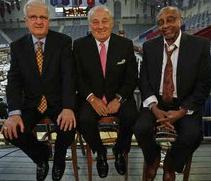 On a rare weekend without a Nova game to watch, at least there's plenty for us to read about the Cats: "Villanova No.1? It could happen" ... "Villanova and (surprise!) Syracuse rule Big East" ... "Chaney, Massimino, Morris honored by Big 5"

Select read more for some highlights:

Chaney, Massimino, Morris Honored By Big Five:  Dick Jerardi of Phillynews.com covers the induction of Rollie Massimino, Speedy Morris (LaSalle) and John Chaney (Temple) into the Big Five Hall of Fame.  Here are a couple of great quotes:  Speedy Morris:  "I was the 15th man on a 15-man team at Roman," My teammates used to call me 'The Judge' because I was always on the bench. I finally got in one time, drove in from the top of the key, drove down the lane and got called for 3 seconds." Rollie Massimino“[T]he passionate tactician at Villanova told the story a great story about the wonderful old official, Steve Honzo. "Steve used to get a tan in some salon and come with his nice, shiny hair," Massimino said. "One day, I told him, 'Steve, that was a terrible call, but will you give me a technical for what I'm thinking?' He said, 'No.' I said, 'Well, I think you stink.' ''

Villanova No.1? It could happen:  Inquirer Staff Writer Joe Juliano writes,  "There's much excitement on the Main Line over the possibility of Villanova beginning next week ranked No. 1 in the regular season for the first time in its history. The Wildcats would need a loss tonight by Kansas at Kansas State to be elevated to the top spot. Then there's a case to be made for Syracuse, which has a higher RPI (1) than 'Nova (4) and the fifth-toughest schedule (compared with No. 39 for the Wildcats), according to collegerpi.com."

Disappointing team:  Louisville: To date, the Cardinals have won only one Big East road game and at times they seemingly ignore center Samardo Samuels, their best inside scoring threat.

Best players:  Wes Johnson of Syracuse and Scottie Reynoldsof Villanova. Reynolds is providing 'Nova with senior leadership and needed offense from the backcourt.

Underachiever:  Devin Ebanks, West Virginia. We've seen only flashes of his versatile overall game. He needs to up his game if West Virginia is to realize its potential.