Share All sharing options for: Villanova Slides Past Providence, 92-81 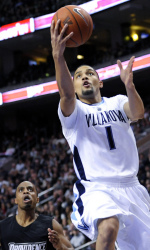 Villanova (22-2, 11-1) continued its winning ways since last Saturday's loss at Georgetown, taking Providence at Wachovia 92-81. However, this one was close for much of the game until Scottie Reynolds and Corey Fisher turned a tight game into another ho-hum double-digit win for the Cats.

The score was knotted at 53 with 13:06 to play. That’s when Fisher, Reynolds and Stokes took over, combining for 31 points the rest of the way as ‘Nova outscored Providence 39-28 to take an 11 point victory.

Scottie Reynolds continued his recent pattern of saving his best for last, scoring 17 of his 22 points during the second half. Corey Fisher was outstanding driving to the hoop all day, and matched Scottie’s 22 points. The two made 16 of 29 shots from the field and combined for seven assists. Antonio Pena also had a double-double with 15 points and 12 rebounds.

The critical turning point in the game came with 8:07 to play as the Friar’s 5-10 PG, Sharaud Curry (19 points), fouled Scotty Reynolds, riding him 10 feet out of bounds.  He snapped at the referee after being called for the foul, adding insult to injury with a technical foul and disqualification from the game.  Scottie hit three of the four ensuing free throws to give the Cats a 67-60 lead and, more importantly, the momentum.  Afterwards, Scottie said of the play, “"I just made a cut to the basket and we got tangled up.  Away from the play, we're still tangled. We got untangled and he did what he did."

The Cats shot 47% from the field, while holding the high-scoring Friars to 39% shooting.  Led by Antonio Pena's 12 rebounds, Villanova out-rebounded the Friars 42-28.

The win was Jay Wright's 200th at Villanova.  The #4 Cats are now tied with #2 Syracuse atop the Big East leader board.  Syracuse plays Louisville on Sunday at the Carrier Dome.