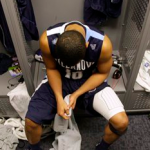 Villanova has three losses on the season, two in Big East play and one against Big 5 rival, Temple. It's rare that a team will make it through a season without losing. In fact, last year's dominant UNC team finished the season with four losses.

In Big East games, some of those numbers change. The turnover comparison gets closer, becoming 14.1 to 14.7 per game and Big East opponents have tallied 15.7 assists to the 'Cats' 14.1. While Villanova has gotten to the free throw line 341 times in conference play (good for 1st in the Big East), opponents have reached the free throw line a conference-worst 396 times (connecting on 72.3%).

While Villanova has consistently done a good job of grabbing more rebounds than opponents, the three losses show a different story. The 'Cats lost that battle against Temple, 24 to 32, as well as against UConn, 26 to 36. They only managed to pull down two more rebounds than the Hoyas.

All three losses saw the Wildcats produce fewer assists than the opposition, as well. Even so, they managed to turn the ball over less than all three opponents.

Each of the teams that won against Villanova shot a lot more from the free throw line. Georgetown and Connecticut both got to the line about twice as many times as the Wildcats. All three also made over 70% of those free throws, with Georgetown and UConn making around 80% -- neither team makes such a high percentage of its free throws on average.

So how did UConn, a 68.9% free-throw shooting team make 80% of their attempts on Monday night? Of their 44 attempts, 16 were taken by Kemba Walker (who averages 77%) and 14 were taken by Jerome Dyson (70.3%). Their best free throw shooter, Gavin Edwards (78.4%) also had four attempts. When you are fouling a team's best shooters that often, you are bound to get burned.

All three opponents shot well from the floor and while they all held Villanova under it's season averages for field goal percent and 3-point percent, UConn held the 'Cats far below those averages. Against the Huskies, it was not only poor defense that lead to a loss, but also an inability to make shots. Scottie Reynolds was hot in the first half before cooling down again in the second half as the UConn defense worked double-time to minimize his impact.

Against good defensive teams, Villanova needs to have more than one scoring option. The single-digit assists (9) against UConn serves as proof that the offense was too monotone in it's execution.

Against almost everyone, the 'Cats need to work on playing smarter defense. Limiting bad fouls is a good place to start. There is no need to allow an opponent to get to the line 50 times in a game, and certainly not when you only get there 23 times (as happened in the Georgetown game). Furthermore, committing fouls that put a team's best shooters on the line is very counterproductive.

I've heard it mentioned that perhaps Villanova should have dropped the press and forced UConn into a half-court offense. Against teams that are driven by their athleticism it makes sense to slow their pace and force them out of their comfort zone. As much as Jay Wright puts emphasis on playing "Villanova Basketball," taking a cookie-cutter approach to each game will get you as far as my cancelled flight during the Snowpocalypse.