Closest to the Pin Round 24 - Syracuse

Share All sharing options for: Closest to the Pin Round 24 - Syracuse

LEADER BOARD AFTER 24 ROUNDS

Update:  Saturday, February 27, 6:45PM     A total of 51 VUH readers  posted predictions, seven predicting a Syracuse victory.  As a group, the readers see ‘Nova winning 82-79 (a margin of 3.0 points and implied total points of 161).  The Vegas odds-makers see things differently, favoring Syracuse (-5.0) in slightly lower scoring contest (over/under set at 156.5), implying a final score of 76-81).   The scatter graph depicting the readers’ predictions as well as statistical information about Syracuse is provided below.   Note, with the mysterious disappearance of BossHogHazzard, Chillcathas stepped up by predicting a 110-75 victory by the Cats.  His prediction was accepted but (in the BossHogHazzard tradition) did not fit within the scale of the chart. 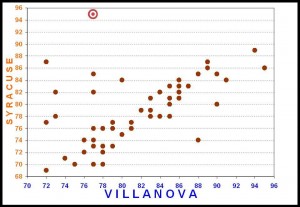 Window Opening:  Friday, February 26, 10:00PM    The window is finally open for our readers to post their predicted final scores for the biggest game of the season so far @ Syracuse in our Closest to the Pin Contest.  After 23rounds, our leaderboard has Andy ‘06 in first place with 21 points, Pete in second place with 18 points, and there is a five-way tie for third place among Barney Rubble ’87, JimK, NJSuper’Nova, Pena Power, and Tommyboy with 14 points each.