Share All sharing options for: 'Nova downed by Orange 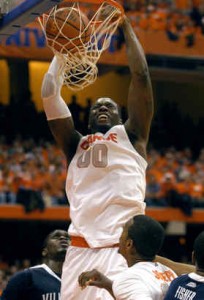 Villanova lost it's third game out of the last four to Syracuse, 95-77. The Wildcats held an early lead, but behind the largest on-campus crowd in college basketball history the Orange made a strong run to end the first half and never looked back.

The 'Cats (23-5, 12-4) were again plagued by fouls, committing more fouls (25-14) than Syracuse and allowing the Orange to get to the free throw line 15 more times. Rebounding, generally a strength for the Wildcats, was another major issue as they were dominated on the glass, 48-36. 'Cuse also won the turnover battle, 16-10. Post defense was another issue as Arinze Onuaku and Rick Jackson combined for 36 points on 16-25 shooting.

Jay Wright's squad was plagued by inefficient shooting from deep, finishing 8-28 for the game. Although the 'Cats shot very similar percentages to the Orange from the field (41.8% to Cuse's 43.2%) and free throw line (72.2% vs. 72.7%), they did so on considerably less attempts from both.

Scottie Reynolds led they way for 'Nova, who had four players in double figures, with 16 points. A major bright spot for Wildcats fans that could be a good sign of things to come this season was the play of Mouphtaou Yarou, who had a career night with 13 points and 8 boards on efficient (6-8) shooting against a strong Syracuse frontcourt.

This loss eliminates Villanova's chances of winning the regular seasion in the Big East, although they are guaranteed to receive a double bye in the Big East Tournament by finishing in the top four of the conference (thanks to the posters who pointed this out!). The Wildcats currently stand alone in second place in the conference, 2 games behind Syracuse and 1 ahead of West Virginia.