Closest to the Pin Final Round -- Cincinnati

Share All sharing options for: Closest to the Pin Final Round -- Cincinnati

Contest Results: After 25 hard-fought rounds, Andy’06, who was shut out over the final five rounds, held on to win first place. Jim K, winning three medals in the final four rounds tied Pete, who also was shut out over the final five rounds, with 18 points. Under the contest rules, "in the event of a tie, the winner will be determined through tie breakers. The first tie breaker will be the number of times the contestants won medals over the course of the season, without regard to type." Jim K won six medals vs. Pete’s five medals, taking second on the tie breaker. Pete takes third place. Select "read more" to view the 65 readers on our final leader board.

Update:  Monday, March 2, 8:00 PM     A total of 50 VUH readers  posted predictions, three predicting a Cincinnati victory.  As a group, the readers see ‘Nova winning 82-72 (a margin of 10.0 points and implied total points of 154).  The Vegas odds-makers also favor Villanova (-3.5) in a low scoring contest (over/under set at 149), implying a final score of 76-73).   The scatter graph depicting the readers’ predictions as well as statistical information about Cincinnati is provided below.   Note, with the mysterious disappearance of BossHogHazzard, Wallace has picked up the slack, predicting a 99-12 victory by the Cats.  His prediction was accepted but, in the Boss' tradition, did not fit within the scale of the chart 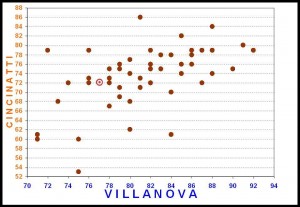 Window Opening:  Sunday, February 28, 5:00 PM    Well, it all began 24 games ago in November against Ole Miss.  The window is now open for the 25th and final round of our Closest to the Pin Contest with the Cats penultimate regular season game on Tuesday at Cincinnati.  It's incredibly tight at the top of our leader board with nine players still in contention for first prize.   Andy ’06, with 21 points, has held first place since the Louisville game, but has not medaled since the February 13th game vs. Providence.  Pete holds second place with 18 points, but also has been shut out for the past four rounds.  JIm k is on a hot streak, now in third place with 15 points after taking one gold and one bronze medal in the last three rounds.  Four readers are well within striking distance with 14 points -- Barney Rubble ’87, NJSuper’Nova, Pena Power, and Tommyboy.

Villanova is presently ranked #7, has an RPI of 9, and SOS of 34.  Cincinnati is unranked, has an RPI of 59 and an SOS of 16.  We’ll post our game preview and the Las Vegas point spread and over/under on game day.