It just came to 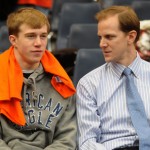 my attention that last night's loss wasn't the only battle where Jim Boeheim came out on top of the Wildcats this weekend. Trevor Cooney, a 2011 shooting guard prospect, gave Syracuse his verbal commitment on Friday.

Villanova was one of the schools that Cooney had been considering. Jay Wright had offered the Delaware-native a scholarship for 2011.

The 6'4" guard is considered one of the best marksmen in his class, and Jeff Goodman of FoxSports.com has described him as an "Andy Rautins clone." This year he has been working to improve his ability to create his own shots.

Missing out on this recruit stings a little because Cooney plays high school basketball at Sanford School in Hockessin, DE, right in Villanova's backyard.

Villanova was high on Cooney's list back in August, but ultimately he chose between Syracuse, Notre Dame, West Virginia and Maryland.

He said that he made his decision because, "I felt the most comfortable with Syracuse as a school and also had the best relationship with the coaches." He also had a strong desire to play in the Big East, which he described as the “best conference around.”

No need to get depressed over the loss, however. Villanova surely fell off of Cooney's list after 2011 SG Achraf Yacoubou committed to play for the 'Cats. Yacoubou is similarly rated and a natural scorer -- in other words, although Syracuse's future gets stronger with this commitment, Villanova is still in good shape for 2011 recruiting so far.