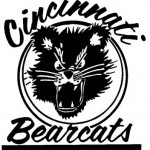 In the month of January the Wildcats were unstoppable. In fact, other than a Big 5 'oopsie' against Temple, the 'Cats had been largely unblemished since November. All good things must come to an end, however, and February brought the toughest portion of Villanova's schedule, and it showed in their record. With two games left, however, it is still possible for Villanova to improve on it's regular season record from last year (25-6, 13-5). With a win at Cincinnati, the 'Cats will match last year's mark in the Big East win-column.

The Bearcats have something far more meaningful to play for: Cincy still has a small hope of earning a bid to the NCAA tournament. They need a big win this week to keep their bubble inflated. You can expect them to give Villanova everything they've got in front of a home crowd.

Cincy has three players who average double-digit points, including diaper dandy Lance Stephenson, who leads the offense with 11.6 points per game and adding 5.2 rebounds and 2.4 assists. Guard Deonta Vaughn isn't too far behind with 11.3 points, 3.6 rebounds and 3.5 assists per game, while forward Yancy Gates averages 10.6 points and 6.1 rebounds. Forward Rashad Bishop adds 8.1 points and 4.6 rebounds per game as well.

The Bearcats have four players averaging over 20 minutes per game, and another six who average over 10 minutes.

The team's overall assist/turnover ratio is 1/1, which is now the same as Villanova's ratio.

Cincinnati is a good rebounding team. On average, they out-rebound their Big East opponents 39.6 to 33.9 rebounds per game (42.7-35 for all opponents). That is a much better rebounding margin than Pitt, UConn or Syracuse this season. Jay Wright will likely continue to give freshman Mouphtaou Yarou playing time in an attempt to counter.

Ken Pomeroy ranks the Bearcat offense 100th in the country (Villanova is 6th), and their defense 47th (Villanova is 55th). Despite having a higher defensive efficiency rating and home court advantage, Pomeroy's computer only gives Cincinnati a 38% chance of beating the Wildcats.

This game is a good opportunity for Jay Wright to get the team to work on their defense. Perhaps more-so than that, however, the 'Cats need to work on balancing the offense more. Earlier in the season there were (at times) five or six Wildcats players averaging double-digit scoring, but now it is only three.*

Don’t forget to get your picks in for Ed’s Closest to the Pin Contest.

*Of course the 2008-2009 Wildcats were similarly situated with most of the points coming from Reynolds, Fisher and Dante Cunningham (compared to this year's top three of Reynolds, Fisher and Pena), and they did just fine. At 16.1 ppg (1.32 PPS), however, Cunningham was more of a factor in the paint than Pena at 11.1 ppg (Pena has been more effective when he does get the ball, at 1.59 PPS)

Update 11:50AM - Just to clarify the Big East tournament seeding situation: Villanova has locked up a top-4 seeding for the conference tournament. Pitt and WVU have probably done the same, but they are the only ones who can pass Villanova right now. Pitt should be favored to win it's next two, which would put them at 13-5. West Virginia only has one game remaining, and can only get to 13-5 by winning.