Closest to the Pin -- West Virginia

Share All sharing options for: Closest to the Pin -- West Virginia

Update:  Saturday, March 6, 12:00 Noon (Game Time)     A total of 47 VUH readers have posted predictions, two predicting a West Virginia victory.  As a group, the readers see ‘Nova winning 82-75 (a margin of 7.0 points and implied total points of 157).  The Vegas odds-makers favor the Cats (-3.5) in a lower scoring contest (over/under set at 151.5), implying a final score of 78-74).   The scatter graph depicting the readers’ predictions as well as statistical information about West Virginia is provided below.  As there are no “Hog-esq” reader predictions in the bunch, all are reflected in the scatter graph. 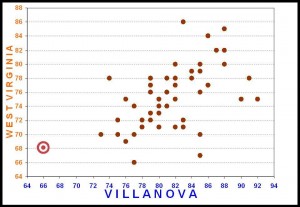 Window Opening:  Thursday, March 4, 8:00 PM    Even though the Closest to the Pin Contest officially has ended, by popular demand we are continuing our tradition of inviting readers to predict final game scores for as long as the Cats keep playing this season.  Everyone has a clean slate.  We now play for pride, not prizes.  So, the window is now open to pick the final score vs. West Virginia on Saturday at Wachovia.

Villanova is presently ranked #9, has an RPI of 7, and SOS of 32.  Despite the inferior record and losing in it's head-to-head game vs. Villanova, West Virginia is ranked higher at #8 , has an RPI of 6 and an SOS of 3.  We’ll post our game preview and the Las Vegas point spread and over/under on game day.