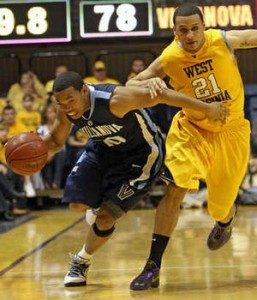 The 10th ranked Mountaineers head to South Philly on Saturday to take on #9 Villanova in a battle for the 2-seed in the 2010 BIG EAST Tournament. This will be the first matchup between the two schools at 'Nova's off-campus home.

'Nova (24-5, 13-4) looks to repeat last month's win over West Virginia in Morgantown when Scottie Reynold paved the way for the Wildcats with 21 points.

Free throws were the difference in the first game as WVU missed 14 attempts from the charity stripe, and they remain a difference to this point in the season as Villanova has over 100 more attempts at the line than Bob Huggins' squad over the season.

West Virginia is led by Da'Sean Butler who averages 17 points a game and 3 assists. Devin Ebanks leads the club with nearly 8 and a half boards a contest. One source said, "West Virginia entered the season with high hopes and a national ranking, and nothing has happened to dampen that. The Mountaineers suffered a few disappointing defeats along the way but not enough to knock them out of the top 10 and now head into the season’s final days hoping to earn a No. 2 seed in the NCAA Tournament. As the season has worn down, so, too, had F Da’Sean Butler, whose scoring has fallen off, but his fellow senior, Wellington Smith, has been strong down the stretch."

For Villanova to succeed, the Wildcats are going to need to get into a higher-paced transition game against the Mountaineers.

Villanova is 21-18 all-time against West Virginia, including 5 of the last 8. Jay Wright has a 4-6 record against the Mountaineers.

The 1985 National Championship Villanova squad will be honored at halftime to celebrate the 25th Anniversary.

Tipoff is slated for 12p from the Wachovia Center. [Tickets]

The game will be broadcast in HD across the country on CBS.

Don't forget to predict the final score in our Closest to the Pin post.