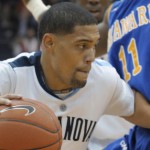 Here at VUhoops, we have been keeping track of Scottie Reynolds' scoring numbers this season. After yesterday's loss to West Virginia, Reynolds moved into second place on Villanova's all-time scoring list, with 2,184 points. He is 59 points away from the record of 2,243 points that was set by Kerry Kittles.

With the regular season over, there are only two more "guaranteed" games left (guaranteed is in quotes because the NCAA tournament isn't technically guaranteed unless Villanova wins the Big East tournament, but is virtually guaranteed). This means that if Villanova were to lose both games, Reynolds would have to average 29.5 points in those games. Assuming three more games, he would need 19.6 points per game, etc.

Can it be done?

So how did Scottie perform against those teams? He had 23 points in the conference-opener in Wisconsin, but only 15 points in the rematch with Marquette at the Pavilion (for an average of 19). Reynolds also had 20 points against Pittsburgh and 16 at Syracuse.

If history repeats itself (and it doesn't ever necessarily do that), Scottie Reynolds could look at somewhere between 51 and 59 points by playing three more games in the Big East tournament. A run to the Big East final, therefore, would seem to make it likely that Scottie Reynolds would surpass Kittles at the top of the all-time scoring list.

There are too many possibilities to go over all of the potential upsets, but to consider a few: Scottie Reynolds had 18 points against UConn, 27 and 24 against Georgetown (average of  25.5), and 21 and 17 against West Virginia (average of 19).

Scottie Reynolds probably can't get to the top without winning a game or two in these tournaments. With a couple wins, however, it may be inevitable. Of course, if history truly does repeat itself, Villanova will not reach the Big East final. Lets hope it does not repeat.