A Look Back In History

Share All sharing options for: A Look Back In History 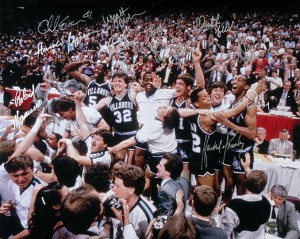 The subtle and not so subtle sentiments of disappointment are palpable in almost every readers' post over the past couple of weeks. The greater our expectations, the greater our disappointment when our expectations are not met. As a Villanova fan for over forty years, I certainly have experienced my share of ups and downs, but have always loved the journey and looked forward to the next game, the next season.

Mike asked yesterday what the team needed. Today, I thought the readers desperately needed a 25-year peek back into history with a few inspiring passages courtesy of Ed Pinckney's Tales From the Villanova Hardwood.

"Villanova traveled to Pittsburgh to conclude the regular season.  The Cats played the first half flatter than a wrestling mat after a week of Sumo Wrestle-mania. They bumbled into the locker room at halftime saddled with a 40-23 deficit.  Rollie felt the guys were embarrassing themselves on national TV.  He told his starters at halftime that he was giving them three minutes to show him desire and commitment.  Two minutes into the second half, Ed Pinkney, Harold Pressley, Dwayne McClain [all future NBA players] and the rest of the starters found themselves in an unusual position.  They were on the bench, where they would remain  for virtually the entire second half."

"We were all sitting in Coach Mass’s office, convinced we should be picked.  We shouted out when Gary Bender of CBS announced Villanova as the number-eight seed in the Southeast Regional.  At that moment, we weren’t worried about seeds, location, nothing.  We were just happy to get the bid."

"The NCAA championship game in 1985 pitted two Catholic schools against each other for the first time ever.  A joke made the rounds that captured the friendly rivalry between the two.  It went like this:  "A sportswriter decided to visit the two campuses to interview the president of each school.  First he went to Georgetown.  After a pleasant conversation with Georgetown President Reverend Timothy Healy, he spotted a golden telephone in a special room filled with magnificent art and gilded curtains.  He asked about the phone, and Fr. Healy replied, Oh, that's a direct line to God."  It costs $100,000. a minute."

"The next day, the writer visited Villanova.  When he and Villanova President Reverend John M. Driscoll bustled down a modest hallway, they passed a little black phone.  Next to the phone was a pice of cardboard with the words "Direct Line to God" scribbled on it in magic marker.  Fr. Driscoll asked, "Would you like to use it?"  The sportswriter replied without hesitation, "I can't afford it."  Fr. Driscoll looked puzzled.  "You can't afford a quarter?"  The sportswriter gasped "A quarter? But it's $100,000 a minute at Georgetown!  Why the big difference?  The good Father smiled and said "that's because from Villanova, it's a local call." 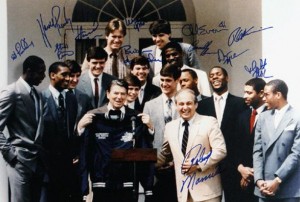 "President Regan joked with the team.  “You’re being called a Cinderella team, but I don’t see anybody hear who looks like he can fit into a glass slipper.  The eyes of the nation were on you, and you didn’t buckle under the pressure.  Your hands stayed steady.  One of the longest moments in sports must be during a jump shot, in that fraction of a second where you’re suspended in the air and the crowd is yelling.  You have to deliver the ball into that tiny cylinder before Patrick Ewing comes out of nowhere to block it.”

“Despite those pressures, Mr. President, Villanova stands before you as the National Champion,” replied Coach Mass.