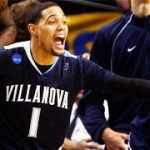 When asked about his benching, Scottie Reynolds referred to it as "The Thing." What a Thing it was, as he and Corey Fisher Scored a total of 10 points on field goals in the game. You can lay blame for the poor performance on any of a number of things that went wrong, but did "The Thing" have an effect on that game?

You'll remember the story from Ed's look back at Villanova history that in 1985, Coach Rollie Massimino benched his starting lineup in the second half of a game at Pittsburgh at the end of the regular season. Villanova had been collapsing at the end of the 1985 season and Coach Massimino wasn't happy with the team's desire and commitment, so he benched all of them. Those 'Cats narrowly escaped Pitt in the Big East Tournament before losing to St. John's in the semi-final by 15.

That loss to St. John's, as you know, was the Wildcat's last loss of the season. The wins weren't necessarily easy, one point separated the eight-seeded Wildcats and ninth-seeded Dayton, and three points was the margin of victory against Maryland. They won the championship with a score of 66-64.

Perhaps then Jay Wright was looking for a similar spark by benching team leaders Scottie Reynolds and Corey Fisher at the beginning of the first-round game. Neither player got into a groove when they finally got into the game. Perhaps he should have pulled this trick out of Rollie Massimino's playbook a bit earlier in the season?

Fisher turned the ball over as many times as he got an assist, and only scored six points on four shots and  1-4 free throw shooting. Scottie Reynolds faired a bit better, scoring twenty points, but 15 of them came on free throws. He shot 13% from the floor and 12.5% from beyond the arc and looked very hesitant doing so. He turned the ball over four times and recorded only two assists.

In football there is a concept called "freezing the kicker" where a timeout is called before a field goal in an attempt to disrupt the kicker and hopefully cause a miss. This happens in other sports as well and perhaps it applies here too. By benching two players used to starting, did Jay Wright "freeze" them? Did the benching so disrupt their routine that it caused an abnormally poor performance?

Did the benching kill their confidence? Scottie often looked tentative on the offensive side of the ball, hesitating before taking shots that he would have normally went for. Fisher played ten more minutes than Taylor King, but shot the ball two fewer times.

There has also been a rumor circulating that the benching was the result of a feud between Scottie Reynolds and Corey Fisher. I would hope that this isn't the case, but if so there is no doubt that some action needed to be taken. Hopefully that hasn't been the problem plaguing the 'Cats since the start of February.

Regardless of the cause, if the Wildcats are going to go anywhere in this tournament, they are going to need a better performance from these team leaders going forward. Hopefully any negative effects of "The Thing" don't carry over to the next game.

Apparently my bold prediction of a win against Robert Morris upset a few people, perhaps more-so because of how the game ended up going. I understand your concern and I apologize for your distress... but we won.

More importantly: VUhoops is running a Blogathon for the Randy Foye Foundation, which you should absolutely check out.