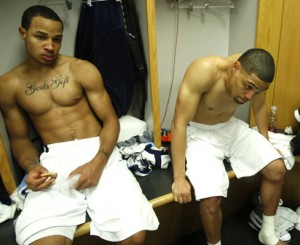 Bob Ford: For Cats, tourney loss matter of when

"Little [did it matter] that the Wildcats had been generously ranked among the top 10 in the nation all season when 6-foot-11 Omar Samhan took the floor for the Gaels, and the Villanova frontcourt defenders, either undersize or underexperienced, couldn't do much with him. Really, though, there was nothing unexpected. When a team - even a team that reached the Final Four - loses its three frontcourt starters and attempts a transitional triage with either smaller players or with freshmen, the physics of basketball will exert its force eventually. As long as the goal is 10 feet from the ground, tall is a good thing to be."

"We almost got there. We just didn't get good enough. We just ran out of time," Wright said. "We were finally at this point where I thought we had great concentration, great preparation, great commitment. I thought we competed hard and this might have been the first time this year that everybody got it. It was a successful season because we got there and the young guys learned what it's all about."

"That's a tough sell to at least a large segment of 'Nova Nation, which has become used to better at this time of year and figured that the presence of Scottie Reynolds could paper over a few deficiencies."

"Still, this isn't the way Reynolds deserved to go out, and there are those who will pick at the scab of the benching or look at the late-season fade and wonder whether the senior cocaptain had been worked into the ground by the end. "He might have been," Wright said when asked whether Reynolds was physically and mentally spent. "It could have been both. This year has been great challenges for us, but no complaints, no excuses. Every team has to go through something."

"In the end, it is difficult to properly explain a team that went 20-1 to start the season and 5-7 to end it. It is particularly difficult when the coach insists the Wildcats were playing much better in that last section of the season than during most of the first stretch."We're going to have to take some heat right now, and we deserve it, but we almost got there. We almost did," Wright said. "We probably had the talent to be a Final Four team, and we didn't get there."

Terry Toohey:  Final chapter for Reynolds at Villanova is a bitter one

"It took a little while for the finality of it all to hit Scottie Reynolds.When it did, when he finally realized his brilliant career at Villanova was over, the 6-2 senior guard made no attempt to hide his emotions. His eyes welled with tears and he choked up a several times as he answered question after question in the Villanova locker room after a 75-68 loss to St. Mary’s in the second round of the NCAA Tournament at the Dunkin Donuts Center."

"Reynolds leaves a lasting legacy that will be hard to match. He guided the Wildcats through one of the most successful four-year periods in program history. “I think of all the things he’s done, finishing as one of the leading scorers, All-American, everything, of all the things he’s done he’s set a great example for these young guys for what it is to be a Villanova basketball player, especially Maalik (Wayns),” Villanova coach Jay Wright said. “They room together on the road. We did that purposely because we wanted to tutor him and Scottie took great pride in that. Maalik learned a lot from him during the year and Scottie spent as much time getting Maalik through the year as he did getting himself ready.”

“You’re never going to replace Scottie Reynolds,” Wright said. “I just have to hope that other guys establish their own identity and impact on our program, but it’s not going to be like him.”

Joe Juliano:  Time Not on Nova's Side

"Us seniors take what coach Wright says and apply it to ourselves," Reynolds said after suffering through a second straight miserable shooting performance from the field. "We can't have everybody have their own way of playing basketball. It has to be everybody on the same page, and he's the guy we look to for that. We assessed it and we started going in the direction he wanted us to be going in, and we just ran out of time. Time was not on our side this year."

"We didn't finish the way we'd like to finish," senior cocaptain Reggie Redding said. "Everybody wants to win the national championship. Everybody wants to be Big East champions. But we never quit on each other. "No matter what happened with anybody, we stuck together. We fought through it. We never quit on each other. The coaches never gave up on us. Nobody in the program ever gave up on us. I love these guys. I love playing with them and I'm going to miss them."

"Fighting back tears at times in the locker room, Reynolds summed up his trip here by shrugging and saying, "That's basketball.""I had great looks, probably the best looks I've had all season," he said. "I don't remember having so many wide-open jumpers. I don't know, it was just me. It was those couple of games that I never had all season that I had today and the first game. "There's no shame in that. I work my butt off, I work my tail off every day, so my teammates know it's not even about that."

"I hate to sit here and say, 'We got our shots,' but we did," Wright said. "Scottie got good shots. Scottie did a better job in this game not forcing shots. He had good ones; he just didn't make them. That's when you've got to make up for it defensively, get a couple of offensive rebounds. It could have gone either way."

"It didn't, though, and Reynolds tried to keep a brave front in explaining what he thought was a premature end to the season."There's no shame in losing," he said. "We came up against a good opponent in St. Mary's that just had our number. We're going to hold our heads up high. It's disappointing that the seniors didn't get this team like we wanted, but that's the way it goes."