Villanova baseball is the third-oldest collegiate baseball program and as of this year, the team has played over 3,000 games over 145 seasons. That means that the Wildcats have been playing baseball for longer than the New York Yankees (109 seasons) or the Philadelphia Phillies (127). So far in their 145th season, the Wildcats are 17-4 and won 2 out of 3 in their Big East opening series against Cincinnati. 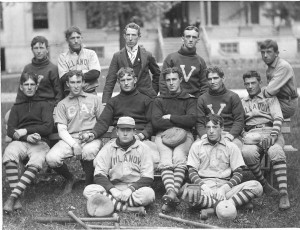 Villanova's resident jack-of-all-trades, Matt Szczur, was last week's Big East and Big Five player of the week, he batted an unreal .652 over a five-game stretch. For the season, the talented outfielder (who has also played behind the plate) is hitting .522 (35-67) and leads the team in runs scored. He has nine stolen bases and has only struck out four times this season.

Szczur isn't the only star on the team, however, Justin Bencsko of Pompton Plains, N.J. joins him among the top ten hitters in the nation. Bencsko is batting .529 on the season so far, and has played in two more games than Szczur. His .614 on-base percentage ranks fourth-best in the country, while his 17 stolen bases are good for seventh in the country and second for stolen bases per-game.

At 2-1, Villanova is tied with West Virginia and the Big East's only ranked team, Louisville for 4th-place in the Big East, but is only a game back from first place (there are three teams tied at 3-0).

While they haven't yet made their way into the national top-25, they are currently ranked number 2 in the Northeast Region by Ping!Baseball. The 'Cats are second in the league in batting average (.328 - Pitt is first) and first in team ERA (3.01). They are also second to Pitt in on-base percentage (.428), third in runs scored and in first in stolen bases (by 19 steals).

For what it's worth, Georgetown leads the conference in wild pitches (29) and hit batters (34). Rutgers has the dubious distinction of leading the Big East in balks (9).

Villanova's best football player happens to be it's best baseball player as well, it seems. Thankfully, like in football, Szczur doesn't have to do it all on his own. This baseball team has a talented pitching staff and some great firepower at the top of the line-up.

Oh, and they have one more thing going for them: Free Admission at Villanova Ballpark

Don’t forget! VUhoops is running a Blogathon for the Randy Foye Foundation, which you should absolutely check out.