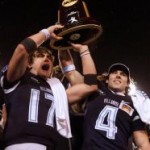 Football season is still a couple months away, but the schedule for the 2010 season of Villanova football has already been posted. As we have known for a while, the 'Cats will open the season with the second "Mayor's Cup" meeting with local rivals, Temple, on Labor Day weekend.

The exact date of the game couldn't be set when Temple's football schedule was released because the Eagles' pre-season schedule was not finalized.

Now that it was announced that the Eagles will host the Jets on September 2nd, Villanova and Temple will take it to the turf at the Linc on Friday, September 3rd.

Unlike last year, the Wildcats will have an early game outside the Philadelphia area (at Lehigh in week 2). Another change this year is that the Penn Quakers will be coming to the Main Line. Although the teams have met for the past few years, the game has been held at Frankin Field for three of the past five years (including the past two).