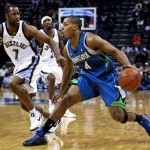 Just moments ago, after some magic ping pong balls shot out of a machine, it was announced that the Wizards, not the Nets as expected, will get the first pick in the 2010 NBA draft. Among the top players in this draft, John Wall and Evan Turner appear as the top options for any team. With Randy Foye as the incumbent Wizards point guard and Gilbert Arenas returning from a suspension, what exactly does this mean?

The experts think that the Wizards would be foolish not to pick John Wall. If they did, they would have tremendous depth at the 1, but not much at the 2 or 3.

Randy Foye could be moved back to the 2, where he would again compete with the taller Mike Miller (6'8") and Nick Young (6'6") for minutes. More intriguing, however, is the possibility that the Wizards could use this draft as an opportunity to not-tender Foye's contract for next season, making him a free agent.

If the Wizards use the first pick on John Wall, the best scenario for Randy Foye is for Washington to cut him loose. Foye is going to be a restricted free agent this offseason if the Wizards tender him a qualifying offer (of at least $4.8million). If they don't tender him, they will lose the right of first refusal and make his free agency unrestricted.

Flip Saunders has said that Foye is a player that the Wizards would want to bring back, but he said that before John Wall (or Evan Turner) fell into his lap.

The Nets are picking third in the draft. Their best player is Center Brook Lopez, and while they like incumbent point guard Devin Harris, they desperately need to get better in their backcourt and now both Wall and Turner may be off the board when they pick. With the team moving to Newark next year, it might be time for them to bring Randy Foye home.

Picking third, the Nets may have to go with Georgia Tech PF Derrick Favors. By signing Randy Foye, they may look competitive enough to lure in the big fish that they were hoping to lure in with Wall: LeBron James.

If the Nets don't bite on Randy, it shouldn't surprise anyone if the Sixers get into the mix. Randy Foye and his alma mater are still popular in Philadelphia, while the Sixers have seen attendance plummet in the post-AI era. In Philadelphia, Foye would be able to compete for a starting job at either guard position. Jrue Holiday has emerged as their first-choice PG, but his 8 points  and 3.8 assists per game are comparable to the numbers put up by Foye in Washington, but his numbers as a starter are notably higher (13 points, 5 assists).

Lets not forget about the Knicks, who have as many needs as any team in the league. Coming off of a below-.500 season like the Nets and Sixers, the Knicks will be looking to add through free agency as well as the draft. Foye may not be the headline name that the Knicks are looking for, but the only player out there this summer that will put them on the back page is probably LeBron James, and they may need to get better on paper to draw his interest.

Foye could also be a target for Boston, a team that may be trying to get younger as it watches its stars age and suffer injuries. Foye would most-likely be a depth option in beantown, however.

The bigger question may be: If Randy Foye is cut loose this summer, where would he WANT to land? In my opinion, the Nets and Sixers provide him the best opportunities to earn significant minutes. More importantly, Foye would be close to home with either team, and would be able to dramatically increase his involvement with the Randy Foye Foundation.

This is all speculation, of course, we won't really know Foye's future until the Wizards make their decision on his contract status.