Share All sharing options for: The Week In Review (Week of May 16)

With John Wall at the top of most NBA Mock Draft lists, what are Scottie Reynolds prospects in the upcoming NBA draft? Scottie is not included on either the first or second round mock drafts published by NBADraft.net , Yahoo!Sports, MyNBADraft.com, TheHoopDoctors.com, HoopsWorld.com, Drafttek.com, DraftDepot.com, Hoopshype.com, ESPN.com, CollegeHoops.net, AOL FanHouse, or SI.com. Only Draftology.com had been picking Scottie to be drafted, going to the Celtics as the 52ndpick overall (round two). However, they have since dropped him from that slot in favor of Armon Johnson (Nevada). NBADraft.net ranks Scottie #90, below the top 60 to be drafted but up 11 places in the past week. Of Scottie, they say, "his ability to score is unquestioned ... However, he's way too undersized to be [a] scorer at the next level, and he just hasn't shown he's a good enough playmaker at the point to run an NBA team ... Defensively he's not athletic enough to keep up with point guards, and lacks height to guard bigger and stronger shooting guards." [Editor's Note: In a variation on the coaching adage, it's too bad for Scottie that Jay can't teach 'height.']

A reporter and camera crew from the ESPN network show E60 documented Matt Szczur's return to Nova's baseball lineup this week against West Virginia after missing ten games due to medical procedures as a bone marrow donor to a 19-month old baby girl suffering from leukemia. West Virginia Metro News reports that " Szczur made a heroic return. In fact, as he hit a home run with his first swing of the bat Thursday night at WVU's Hawley Field. Szczur later drove in two more runs with a single as Villanova handed the Mountaineer baseball team a 5-4 loss."

Providence Journal-Bulletin  recaps the long list of Big East Conference star underclassmen lost to this year’s NBA draft. Syracuse lost Big East "Player of the Year Wesley Johnson after only one season of action. Georgetown enjoyed center Greg Monroe for two. Junior Dominique Jones (South Florida) enjoyed a breakout season and bolted. So did sophomores Devin Ebanks (West Virginia) and Samardo Samuels (Louisville). All six of its first-team all-league picks are gone. In fact, only eight of the 19 players honored as all-conference selections will be back next season.  Joining Johnson, Monroe and Jones on the 2010 all-league first team departures were senior stars Luke Harangody (Notre Dame) and Scottie Reynolds (Villanova).  That will not only make for a wide-open season but also place conference leaders in a tough spot when they need to make scheduling and TV decisions, says conference associate commissioner Dan Gavitt. “We have some teams that return the bulk of their starters, which bodes well. But what we have to find out is which kids will step up and become our next generation of stars.” Who are the top candidates to become stars? Players such as UConn guard Kemba Walker, Georgetown’s Austin Freeman and Chris Wright, Pittsburgh’s Ashton Gibbs, Villanova’s Corey Fisher, Seton Hall’s Jermey Hazell and Notre Dame’s Tim Abromaitis top that list. So does Providence’s Jamine Peterson."

The early favorites in the Big East will be the teams that return the most talent.  St. John’s returns all five of its starters and has eight seniors ready for new coach Steve Lavin. Seton Hall was the one Big East team that hit the jackpot last week when Willard welcomed back Hazell, Herb Pope and Jeff Robinson to a team that can easily push for a top-five Big East finish. Pittsburgh finished 13-5 in the conference and return all except one key player. If Gibbs, Brad Wannamaker and big man Dante Taylor take major steps, Pitt could morph into an elite team. Villanova  loses Reynolds and Reggie Redding, but Fisher, Corey Stokes, Maalik Wayns and young big man Mouphtau Yarou give Jay Wright another very good core of talent.  The other programs expected to contend for a Top 25 ranking include traditional headliners Georgetown, Syracuse, West Virginia, Connecticut and Louisville, but each has major holes."

The Hartford Courant continued its series looking at the prospects of each Big East basketball team next season.  About Villanova, they write, "Scotty Reynolds, the face of the team and one of the most prolific scorers in college basketball, has exhausted his eligibility. But the Coreys return – guards Fisher and Stokes – and will form a formidable senior core with forward Antonio Pena.  Sophomore guards Dominic Cheek and Maalik Wayns return and will see increased roles. The Wildcats will be, yet again, particularly dangerous on the perimeter. Big man Mouphtaou Yarou will have to show more." 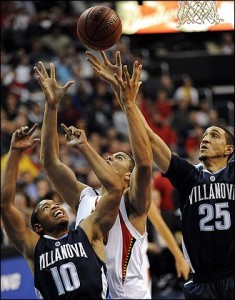 With the news that Maryland may be playing Villanova next year in basketball, Testudo Times  gave a preview of the Wildcats vs. Maryland matchup. “The Terps lost last year in the BB&T Classic to the Cats by 9, but that was due in large part to some ridiculous outside shooting by the Wildcats. Jordan Williams dominated the Villanova front-line, albeit without Mouphtaou Yarou, and Sean Mosley had an offensive outbreak, so from that angle I like Jay Wright's squad quite a bit.  Nova, like Maryland, loses their best player, Scottie Reynolds, but they have a much stronger returning cast than the Terps. Three starters return, and two of them figure to be potential stars in Corey Fisher and Antonio Pena. Yarou will also return and figures to be healthy this time around, and last year's freshman studs Maalik Wayns and Dominic Cheek will have much more prominent roles  It's a game that Maryland won't be expected to win and probably won't unless Williams and Mosley are better than expected and Villanova's unproven potential stars, like Fisher and Yarou, aren't as good as possible. I still wouldn't rule Maryland out, though, because ultimately Villanova is an unproven team, almost as much as MD. You never know what can happen, even if Nova will be heavily favored, and with reason.”

One of our favorite sports journalists, ESPN’s Dana O’Neil, wrote an article this week about basketball players who showcase their skills and improve their draft stock via March Madness without coming close to finishing their classes. "No one, not even academics, find fault with the players. Instead, they point to a fallible system that offers a gaping loophole for freshmen and no clear solution for upperclassmen.”  Dana interviewed former Nova star, Kyle Lowry, who left Villanova after his sophomore season but claims that he finished his sophomore classes in advance of his departure.  About balancing the obligations of the classroom and the basketball court, Kyle told Dana, “"I think it's our responsibility to do our best, don't make it a joke. But for guys who are going to be pros, they're 80 percent basketball players, 20 percent students to begin with. The schools are using the players, but the players are using the schools right back."  Lowry told Dana that he left the Villanova campus just two weeks after making his decision official [Editor’s Note:  Kyle announced on April 27, 2006], flying from the Philadelphia suburbs to the IMG Academy in Florida, where he trained until the June draft. Lowry said he'd like to get his degree one day, but admits he's done nothing since leaving Villanova in 2006 to make that happen.”   [Editor’s Note:  In Kyle’s April 2006 press conference announcing his decision to enter the NBA draft, he said "I'm going to get my degree no matter what. That's high on my list."  Now earning $2,034,996 per season for the Houston Rockets,  his degree may have dropped a couple notches on that list.  Last season, Kyle averaged 9.1 ppg, 4.5 apg and 3.6 rpg in 24.3 mpg.]

Dana goes on to say, “earlier this month, the Lexington Herald-Leader reported that John Calapari's University of Kentucky basketball team had compiled its worst GPA in eight years and the worst among the school's varsity sports during the fall semester. Included in the stark academic reality was the fact that two players finished with GPAs of 1.667 and 1.765 in their fall semester.  And yet no one was ineligible for the spring.  It doesn't sound possible, yet it's entirely aboveboard. Under NCAA rules, players in their first year of college need only to pass six credits in their first semester to continue to play. It's not until they complete their entire freshman year that the minimum GPA kicks in. College hoops players need only to pass six hours in the fall to remain eligible for the second half.  In other words, a one-and-done player could conceivably be a none-and-done player: Play an entire season, bolt for the NBA and have all of six credits to show for the effort.”

ESPN discusses high school prospect, Ky Madden (Lepanto, Ark./East Poinsett County), saying he “utilizes his long frame well, which helps him score in bunches during short stretches. He showed the ability to run his Arkansas Wings team at the point guard position, which is something he has been working to develop, but he also showed the ability to knock down mid-range jumpers and shots behind the arc. Defensively, Madden will need to continue to get stronger in order to keep his man from getting into the lane. His length is great for disrupting the passing lanes, but by adding strength to his long frame, Madden will become a much better defender. Currently, Madden's offer list includes Arkansas, Villanova, Memphis, Ole Miss and Baylor, among others.”

The Charlestown Daily Mail reports that "Big East Conference coaches, administrators and executives descend upon Ponte Vedra Beach, Fla., this weekend for the most important round of league meetings since the last time a rival conference readied for a raid.  The Big Ten is exploring expansion in circumstances similar to the ACC raid on the Big East seven years ago, when Miami, Boston College and Virginia Tech departed.  Several several Big East teams could be invited to the Big Ten this time. The Big Ten met this week in Chicago, although no news came from the event apart from a proclamation from Commissioner Jim Delany that there was no accelerated schedule for expansion.

The Big East's meetings, which begin Sunday and conclude early Wednesday, are an annual event designed to discuss and workshop different topics. The expansion situation has been aided by the assistance of former NFL Commissioner Paul Tagliabue as well as regular conference calls. He expects no expansion news to come from the meetings, although it's an obvious talking point." 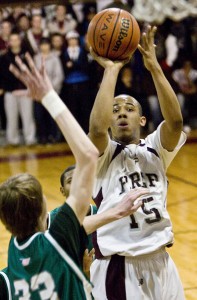 With a hat-tip to VUHoops reader “CJ”, Zagsblog reports that Villanova is in the hunt for Myles Davis, a 6-foot-2, 180-pound combo guard from Jersey City (N.J.) St. Peter’s Prep, is the No. 9 shooting guard in the Class of 2011.  Davis averaged 20.1 points a game and was named First-Team All-State by The Star Ledger. He dropped 33 points in an upset of Oak Hill (Va.) Academy, scored 29 in the Group A final against Camden Catholic and had 23 against St. Anthony. “Villanova has made a commitment to Myles Davis,” Coach Kelly said. “They’re going to offer him in person. Jay Wright said they’re going to offer him a scholarship.”  “I talked to Coach Wright,” Davis said. “He seems really interested in me. I’m interested in the program, too. Coach Wright produces guards and it’s a guard school. If you want to get better as a guard that’s definitely a school to look at.”  Aside from Villanova, Davis is also considering Big East rivals UConn and Georgetown.  If you ask Kelly, Villanova would be a good landing spot for his star guard. “What a great spot that would be,” Kelly said. “It’s a great spot for him. What I told Coach Wright is Myles is not a point guard. He’s not a wing. He’s really a slot guy, a guy that can slot toward the wing or toward the point.”