Scottie Reynolds in the Draft

Share All sharing options for: Scottie Reynolds in the Draft 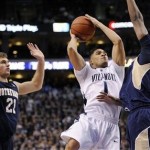 In his last Week in Review post, Ed noted that most of the mock draftsters have left Scottie Reynolds completely off of their draft boards. Pro scouts can't deny Scottie's ability to score, he has done too much of that over the past four years. Despite that, the scouts will continually peg him as too short to play the 2 and not athletic enough to play point.

Will Scottie prove the detractors wrong? Does any team out there want Scottie Reynolds enough to use a draft pick on him?

In a piece I did for Ballin' is a Habit, I suggested that although Scottie is unlikely to be drafted, he should find his way to an NBA roster nonetheless. Much as Allan Ray was passed over before being signed by Boston, the tremendous college career that Reynolds had will surely create some interest.

Where would he play at the next level though? Scouts and coaches in the NBA want him to be able to play point, but his skill set would play great at the 2. Scouts don't like him off the ball, however, because he's not seen as tall enough to match up with NBA 2's.

What do you predict?